WHAT a weekend. I wish I could just hit “repeat.” 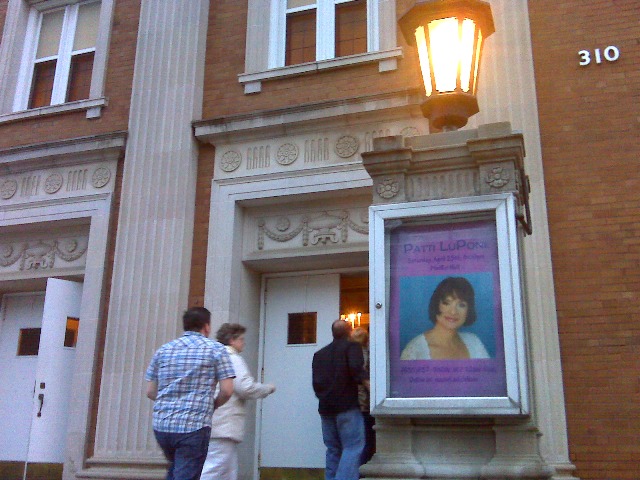 First off, Pfeiffer Hall in Naperville is one of the quaintest venues I’ve seen LuPone play. Smack in the center of Naperville’s town square and kitty-corner from a church, it’s just a few steps up from a high school auditorium. The stage is very wide and high, so if you sit front row, be prepared for neck cramps.

This was my fourth time seeing LuPone do this particular show, and it was the third best performance she gave of it (first goes to the first time I saw it at Ravinia in 2003, second with the CSO. Last place goes to the Urban Gateways performance). She looked great and sang well. However, seemed like she had a plane to catch, as she barreled from song to song, racing through dialogue. She added some new material this time around from her Mandy/Patti show, Matters of the Heart and Lady With a Torch: “A Quiet Thing,” “Everything’s Coming Up Roses” (Complete with a house blackout on the final beat of the tune, which seems only appropriate), “I Never Do Anything Twice,” “Send in the Clowns,” and “So In Love.” She also sang “Being Alive,” which I can’t recall if I’ve ever heard her sing this live before, actually. Isn’t that horrible? I wish she left in “Losing my Mind.”

We sat far right, and she seemed to spend more time singing to the left of the house. Or maybe I’m just greedy. She did come over during her second final encore (“The Way You Look Tonight”) with a disposable snappy camera, taking pictures of the audience (with flash!) as if to make light of her infamous youtube moment. She took a picture of me, Gator and Kristen (who had seats in front of us.) How fun would it be if she had these developed and posted on her web site? I bet the camera gets tossed post show.

Oh, and she didn’t forget one lyric! Girl needs to get some new outfits, though. The black lacy, beaded top has worn out its welcome.

I loved this race. So well organized, ideal weather (if a touch chilly), and great T-shirts. The T-Storms stayed away, and I ran my best time so far: 26:30, which averages out to an 8:32 mile! Thanks to Mavis, Jamie’s mom, for the pictures!

Hedwig and the Angry Inch was one of the BEST things I’ve seen in Chicago. I think it ties with the production of Caroline, or Change I saw last fall with the amazing E. Faye Butler. Just like Caroline, Hedwig is anchored by a staggering leading performance. Nick Garrison as Hedwig delivered one of the best performances I’ve seen an actor give on a Chicago stage. Maybe any stage. (I might need some time to calm down from it and let that determination sort itself out.)

The tone is set from the moment you enter the theater. You literally walk down an ally, past a row of dumpsters, until you see a broken sign by a metallic door: “American Underground Presents Hedwig and the Angry Inch.” You knock on the door three times to enter. From there, you go down a dark, twisting corridor covered in rock posters (not unlike a haunted house) to get to the performance space. You really feel like you’re in a seedy, underground club, complete with mismatched chairs, paper lanterns, streaked warehouse windows (that double as projection screens), a giant, pink chandelier, and christmas lights. (Just neveryoumind that it’s a sunny Sunday afternoon — I wish we had seen it on a rainy Saturday evening to make the experience even more authentic).

The fact that the American Theatre Company’s space (Or “American Underground”) shares a wall with Martyrs’ is a great asset to the piece, too. I won’t go into details as to why — just see it.

Garrison’s made a career out of playing Hedwig in various productions, including the original Chicago production in 2001 (when he was just 26), and multiple productions in Seattle and London. I didn’t see the 2001 Chicago production, which was a copy of the off-Broadway version. From what a I gather, the American Theatre Company’s production is much darker than that. Anyway, I’d imagine it takes a rare breed to play Hedwig: very strong actor, rocker voice, funny, sexy, scary, dangerous and alluring. Garrison evokes all of this, and more. I love the movie and John Cameron Mitchell’s performance. While JCM’s Hedwig is pretty, angry and bitter, Garrison’s Hedwig is dangerous, scary, emotionally raw.

Ok – may I bitch for a moment? As fabulous as this production is, I wish we were aware of the assigned seating. Ticketmaster says it’s general admission, so imagine our surprise to learn that arriving super early to get a good seat together was a waste of our time. Not only did we not get to sit next to our friends, I had to sit on the MOST uncomfortable chair that was two minutes from falling apart and two feet from the actors. Being that close to the action isn’t really my thing (especially since I had to tuck my legs into themselves to not trip the actors), and poor Gator got a lap dance during “Sugar Daddy”. However, I’m certain they do this seating switch-a-roo to ensure Hedwig has people to play with in the the front rows (such as the nice white-haired lady who got spat on.)

Ok, now that I got that out of my system.

Garrison’s performance blew me away. (I’m a bit obsessed.) What he has to do for two hours is just unreal. During the final moments of the show, my throat hurt because I was choking back tears so hard (I hate crying in public.). A few tears did seep out, however. Dammit.

Sadieh Rifai as the brooding Yitzhak was also great. From my seat she was just a foot away from me, so her performance made a bigger impact than I think it typically would. Some people might be thrown off by the final moments of the show concerning her character’s transformation, but I was very moved.

I also want to make note of the sound designer. While this was essentially a rock concert with a story, I was expecting ear blowing decibels – especially with a large amp next to my head. However, it was very balanced, and more subtle than most big-budget shows I’ve seen recently (such as Wicked.) You still got the rock feel, without the bleeding eardrums. Bravo, sound designer!

An A+ production featuring one hell of a performance. Go see it!

Following Hedwig, we bbq’ed and Beth learned me how to make brownies from scratch! Mmm.