Mental illness: Is it a curse, a tragedy, a fantastical journey, a stigma, a portal to enlightenment, an impending threat, or a legacy? Lisa Dillman’s powerful new work, The Walls, of which I caught the third preview (it opens May 17), chooses ‘all of the above’. The Rivendell Theatre Ensemble has delivered a stunning production, currently having its world premiere at Steppenwolf’s Garage Theatre.

In my experience, it’s rare that a stage play effectively conveys a Big Message without somehow sacrificing emotion. The Walls manages to overcome this challenge — and then some. It also can’t hurt that the work is grounded by sensational performances from a diverse and daring cast.

Carrie (a lovely, nuanced Lacy Katherine Campell) is a tightly wound 23 year-old who has been stewing over mountains of research in the stalled attempt to write a book on women in the late 19th and early 20th centuries who were held, against their will, in captivity for demonstrating signs of mental illness. The topic hits close to home for Carrie, as her mother, Virginia (the powerful Meighan Garachis) is rapidly losing her battle with the disease, and Carrie is all too aware that she may shortly follow in her mom’s footsteps. Through the course of her late-night research binges, Carrie crosses paths with Lucy (Mierka Girten), a seemingly free spirit who becomes part of Carrie’s research while, much to Carrie’s protest, helping Carrie confront her fears.

Dillman has created a pair of highly fascinating and complex relationships between Carrie and her mother and Carrie and Lucy. Garachis is perfect as Carrie’s eccentric, mentally decaying mother — kind of like a bi-polar, schizophrenic auntie Mame. Her magical and poignant childhood story (played out with puppets (!) designed by Joe Mazza) she passes on to Carrie builds a beautiful narrative and thematic heart to the show. And, as Virginia’s mental state decays, her disturbing verbal attacks on Carrie serve as a jarring reminder — to both Carrie and Virginia — of the disease’s impact. As the energetic and earnest Lucy, Girten is just sensational. In her attempt to help (or, rather, beg) Carrie to let down her guard, Lucy explains how the illness has, curiously, enriched her life.

Accenting Carrie’s story, two main subjects in her research act out their struggles with the disease. Much to their confusion and anger, these two women are quickly squirreled away — by their husbands and fathers — to some remote facility, only to be forgotten about and, ultimately, blamed for their condition. While these scenes felt a little heavy-handed in terms of the “oppressed female vs. the male authority figure” stuff, it didn’t detract from the overall piece. Also, strong performances from Danica Ivancevic, Tara Mallen, Mark Ulrich and John Zinn keep these scenes compelling. And while I appreciated the reasoning behind it, I found the girl in the yellow dress (Ashley Neal) aggressively symbolic.

Through a collection of large, white glowing frames, Elvia Moreno’s sets and Diane D. Fairchild’s lighting design nicely convey the dualistic impact mental illness has on these women — suggesting its confining, yet unexpectedly enlightening effects. (Although, I might be misinterpreting this…) Chris Kriz’s sound design helped create a highly unique aural atmosphere while providing a chilling final coda to the evening.

So: mential illness. It’s a tricky topic to broach. However, Dillman does a fantastic job highlighting many viewpoints of mental illness, ultimately concluding that it’s a serious (and very real) disease, and a subject that must be exposed and talked about — not ignored, pitied or locked away.

The Walls is currently in previews, opening May 17 and running through June 20.

Side note: It seems that after 14 years of renting performance spaces, Rivendell is securing a permanent home. And, lucky for me, it’ll be in my hood — Edgewater! 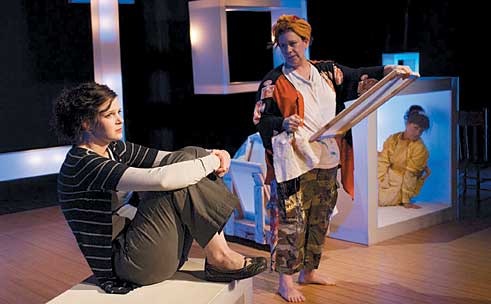 Lacy Katherine Campell and Meighan Garachis in “The Walls”

One thought on “The Walls @ Steppenwolf’s Merle Reskin Garage Theatre”