My aunt and mom are in Chicago this weekend to tool around and see Jersey Boys. (I just picked them up from the show — they LOVED it.)

Earlier today, we decided to visit the Shedd Aquarium. Clearly we were on crack, because the Shedd on a sunny Saturday is a fate I wouldn’t wish on my worst enemy. What a crowded, unorganized mess.

However, I was excited to see some fish and tree frogs. Which we did: 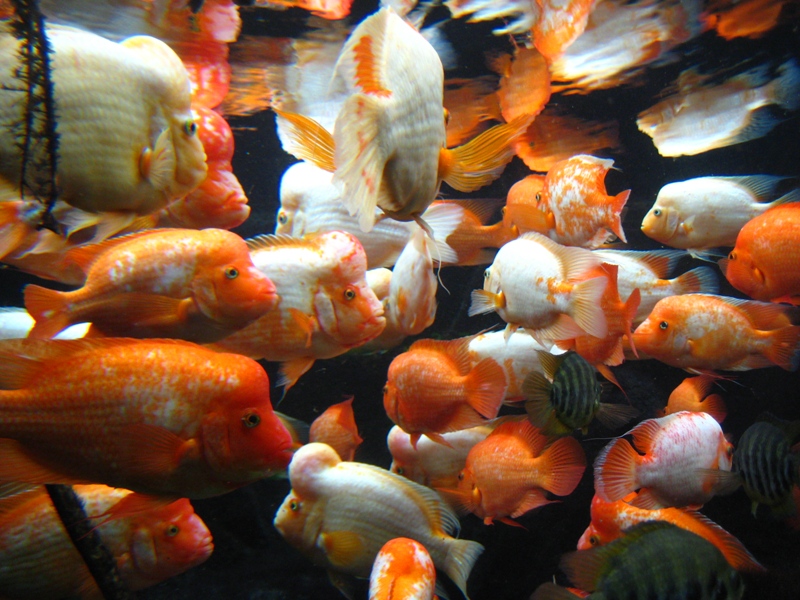 But I was most excited to see the new multi-million dollar dolphin show experience: Fantasea. We were kicked out of the noon show, as they reached capacity, so we hung around two hours for the 2 pm show. And, you better know it, we were in line by 1 pm.

We got a seat…and waited.

Then! A preview movie started about the majestic beluga whale, and how they were heavily featured in this new show. We were promised jumping dolphins and tap dancing seals and waddling penguins. (Ok, I’m lying about the seals.) Oh, the experience we were going to have! “Life changing,” they said.

Some more teasers about the upcoming show. Such a buildup!

An emcee came out and got us even more fired up. “Clap if you love dolphins!!!! YAY!!!”

The actors/handlers just kind of stood there waving fish and colored objects in the water while the music and strobe lights built to a crescendo. But, still…nothing. Awkward glances were exchanged between trainers and audience members. One actor ran away. The little girl actress did her best to pretend she was seeing some cool shit going on in the empty water before her…it was a Tony worthy performance.

And then several more minutes of nothing. Some beluga whales did come out, but just swam around in circles a few times — then were gone. A lady came out with some sort of hawk, but it didn’t fly — and just stayed tethered to her.

The penguins were rolled out to liven things up, but even they weren’t having it — they just stood there. The handlers even lightly scooted them to move around a bit, and they would. not. budge.

Finally, after more awkward moments of nothing, the emcee came back out and informed us that the animals were not performing this afternoon, and the show was over.

That was it. Over.

We were told we could get a special ticket for a future performance. But screw it. After spending $300 on parking and nearly losing my sanity with the overcrowded disorganization, I’ve no plans to visit Shedd any time soon.