This weekend I sat on my couch and downloaded a movie I’d intended to watch for months. And then I watched it. After that, I downloaded another movie I also had an interest in. And I watched that one, too. And now I’m going to write about them.

Watch out! It’s a party around here.

Precious: Based on the Novel ‘Push’ by Sapphire 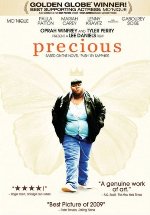 As bad as things may seem in your life, just watch this movie and you’ll feel a lot better.

That may seem like a horrible, egocentric thing to say, but it’s true. This powerful film makes you appreciate how easy things come for many of us — we have, to varying degrees, the means to actualize our dreams. Some more than others, but at least there’s a fairly reliable support network to fall back on. Precious has none of this. She’s invisible. No, she’s more than invisible: she’s practically written off; dead. Yet she slowly finds her voice and rises above it. It’s simply inspiring. And completely heartbreaking.

It’s no secret that this is a hard movie to watch. The abuse — the most horrific of it occurs off camera — is beyond shocking. It sickens you. Yet, there is light and hope, as seen through Precious’ escapist daydreams and her desire to be a good mother.

The script seems to jump around too much, often strangely condensing time or cutting away from a scene awkwardly. But the performances meet all the praise and awards they’ve received. Gabourey Sidibe is phenomenal. Mo’Nique even more so. And Ms. Mariah Carey — who knew? 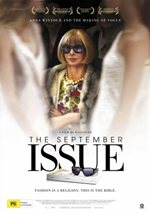 Powerful, brittle white people stressing over million-dollar photo shoots? I’m pretty sure this is the polar opposite of Precious.

Anna Wintour is the most influential woman in that strange land known as “the fashion industry,” yet she’s not Miranda Priestly from The Devil Wears Prada. There’s no passive aggressive abuse or pursed-lip manipulation — or even a coat thrown on anyone’s desk, anywhere!

Oh, she’s smart, and maybe she dialed back the bitchy for the cameras, but from what I saw, she’s a decisive, capable woman who takes emotion out of her business dealings. And I can see how people can find that threatening. But, to me, that’s how you get sh*t done.

I loved the interaction between Wintour and Vogue Creative Director Grace Coddington. It’s a business dynamic I’m all too familiar with: talented, stubborn underling who reluctantly acquiesces to dogmatic superior. There’s mutual respect there, but also strain. Yet, that’s where creativity thrives: the pressure and the determination to have your work seen. As Coddington notes, after learning that another one of her photo shoots has been tossed aside by Wintour, “You’ve got to have something to put your work in. Otherwise it’s not valid.”