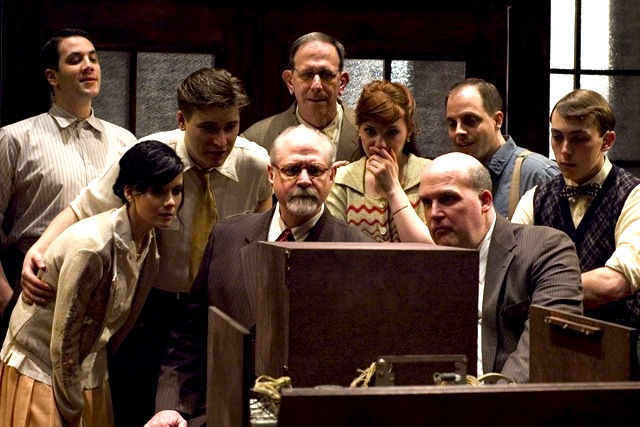 The brink of discovery: The cast of TimeLine Theatre Company’s ‘The Farnsworth Invention’ wait in anticipation.

“What’s next?” The process of invention requires big thinkers and risk takers to tackle that daunting question.

Aaron Sorkin’s turbo-charged The Farnsworth Invention dramatizes the race to invent television, a revolutionary concept that had been in development for many years prior to a self-taught (let’s say genius) inventor named Philo T. Farnsworth (intensely played by Rob Fagin), along with his rag-tag team of assistants, successfully transmitting the first moving image electronically in 1927.

Meanwhile, back at RCA, company president David Sarnoff (a driven PJ Powers) is seething over this discovery — his company should own the patents and the technology to develop in-home television systems (dammit!). It’s the new frontier, and Sarnoff is not one to follow. His approach to innovation is to take and control. Heads butt and arguments of idea ownership are brought to the surface and dissected in wordy detail.

There’s a lot of ground to cover here, so pay attention. To make this complex subject matter work in a 2.5-hour window, we must (quickly!) be brought up-to-speed on a number of matters, including the basics of electronic airwaves, image dissection and photoelectric cells, patent law, the history of radio, the development of RCA and NBC, and the events leading up to the stock market crash of 1929. And then there’s the whole matter of Farnsworth and Sarnoff’s backstories.

Sorkin compacts this information so tightly, it feels like the seams of the play may burst. To assist with this history lesson on Speed, Farnsworth and Sarnoff hand off narration duties, causing points of view to shift faster than it takes an electronic signal to reach a cathode-ray tube (apologies to Farnsworth for muddling that metaphor).

Ok, I’ll admit it: it took me a while to catch on. It would have helped to have read the information-packed program before TimeLine’s first-rate production begins. A foundation of information and some context are essential to improving your enjoyment of the show. And it is an entertaining show. Invention and inventors fascinate me. The ability to have a revolutionary vision and overcoming the odds to see it through makes for compelling storytelling. And director Nick Bowling swiftly moves a surprisingly large cast of 16 through their paces. There’s never a dull moment. However, I would have more enjoyed understanding what made these two men tick rather than spending my time processing the information pummeled at me.

4 thoughts on “Information overload: TimeLine’s ‘The Farnsworth Invention’ isn’t for the lazy”