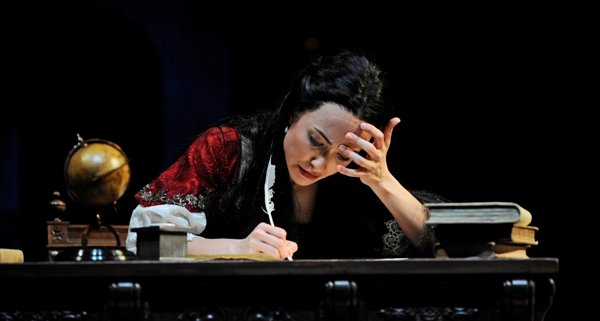 “I shall never write again!,” declared 16 year-old prodigal poet Juana Inés de la Cruz in blood in 1693. Playwright Karen Zacarias extracts this dramatic moment from the pages of 17th century Mexican history and imagines what drove this free thinking beauty — one of the first icons in Mexican literature — to join the convent and then vow herself to a life of artistic silence in The Sins of Sor Juana.

In Zacarias’ fertile imagination, Juana (played with straightforward earnestness by Malaya Rivera Drew) entered the convent due to reasons of a scorned heart caused by the viceroy (Tony Plana, of Ugly Betty fame) attempting to ruin her honor (for reasons I’m not too clear on) by hiring a hot con artist (Dion Mucciacito, who looks best shirtless) to bed her. Doing so would destroy not only her name, but her friendship with the vicereine (the always awesome Amy J. Carle). Naturally, Juana falls in love with her shady suitor, and he with her — but then truths are revealed, swords are drawn and blood and tears flow.

The play is written as a giant flashback, framed by the moments before and after Juana bloodily declares her perpetual abstinence from the pen (er, quill). The opening scene when her books, paper and quills are taken away to be burned by her sisters isn’t as powerfully played as one would expect. Where’s the urgency? You never really get the sense Juana, as played by the über-contemporary Drew, would die for her art.

In an apparent attempt to make this story more relatable, director Henry Godinez gives the entire affair a contemporary flair. Bits of slapstick comedic business are interjected by Joe Minoso, who plays Don Pedro, the viceroy’s foppish associate, and Drew’s Juana mostly resembles a latina Belle from Beauty and the Beast — a no-nonsense heroine.

For all the shouting and fluster on the stage, the impact is remarkably flat. Overall, I wanted more magic. Juana was a sensual, smart and passionate young woman, and this physically attractive production doesn’t really capture her spirit. We are given a lavishly-produced tale of ill-fated romance with little flair or fire. We don’t really learn what made this young woman tick. Where does her passion come from — what drives her? I left wanting more.

“The Sins of Sor Juana” plays through July 25 at the Goodman Theatre. More information here >