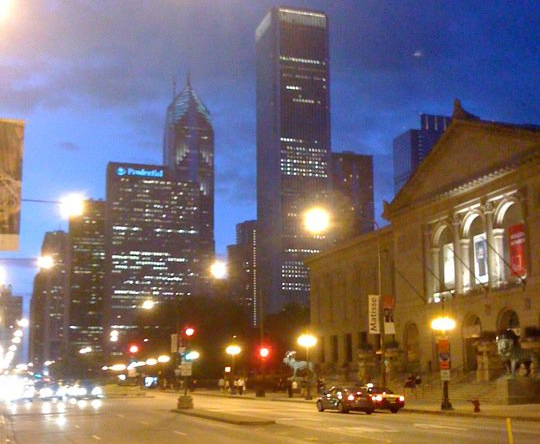 Maybe it’s this string of lovely weather we’ve had lately combined with the fact that I have no funds to go elsewhere for fourth of July weekend so I’m forced to make due, but I’m feeling strangely sentimental about this town I’ve called home for the past eight years.

What is it about Chicago, currently, that turns me on?

Street festivals. I’ve attended a street festival nearly every weekend for the past two months. Midsommarfest, May Fest, Blues Festival, Pride Fest — there’s food and music and beer and friends. Check out what’s on tap for the next three months!

Grrrrrilling! We have this dirty old smoker on our patio (no, Gerald, I’m not talking about you! awww…), and it’s basically breakfast, lunch and dinner during the weekends. Sometimes we watch those BBQ challenge shows on the Food Network and try to recreate their slow-smoked ribs. We never succeed, but we have fun trying. We also have a travel grill for beach grilling, which we intend to bust out this weekend. Meaning: Gerald will cook, and I’ll sit in the shade next to a tree and bitch about the heat and the sun. We all have our talents.

Riding the el (with the crazies!) One of the lovely things about my job is the option to work from home. However, I enjoy going downtown far too much and actually look forward to my commute each morning. It’s a relaxing stroll to the Thorndale Red Line stop, and then some quality time with me, my iPod, and a book to Lake. And, if you’re lucky, a crazy homeless woman pees in a cup next to you and throws it out the train door at Clark and Division (true story). It’s like free theatre!

And speaking of theatre… Chicago has some awesome summer theatre going on now. I look forward to Cherrywood at Mary-Arrchie (tonight!), Red Noses at Strawdog, That Sordid Little Story at New Colony, and, yes, Shrek the Musical at the Cadillac Palace. And, as a side benefit, I’ve also made some fun new friends from this blogging experience — including the effervescent Katy Walsh of The Fourth Walsh. She’d be my new favorite thing if I were Oprah — which I’m not, just to avoid any (further) confusion.