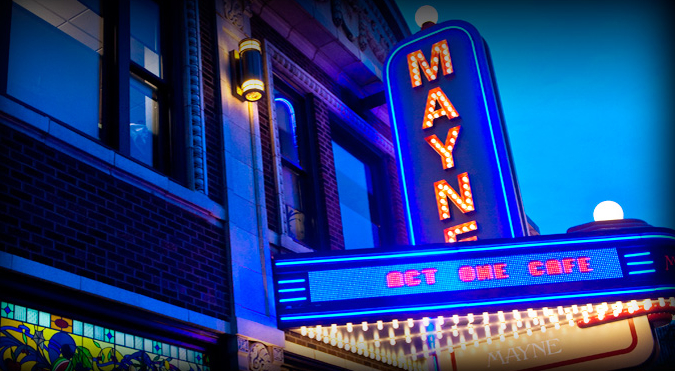 There are some performers who, when faced with two shows in a single evening, hole themselves up in their dressing room to recharge between performances.

And then there’s Ann Hampton Callaway, who, after singing her heart out for 1.5 hours to a sold-out crowd, casually strolls into the handsome Mayne Stage lobby and sits in a booth at the attached restaurant, where she then holds court with her fans up until the 15 minute call for her 10 p.m. show.

This is an entirely approachable charmer, on and off the stage.

During my very brief conversation with AHC in that booth, I asked her about “Singer’s Spotlight” — a public television series hosted by AHC that celebrates the American songbook and its great interpreters. Liza Minnelli and Christine Ebersole were her two guests in the show’s tryout airings a few years ago, yet nothing’s happened with it since. According to AHC, the show is looking for funding to get it off the ground, but she is hoping to produce it in the meantime as a radio series. “I think it’s so important to keep these songs alive, and let kids know there’s more to performing than American Idol,” she said to me.

AHC will also be bringing “Boom,” the new show she developed with her equally talented sister, Liz, to Schaumburg this fall — Sept 11, to be exact. (She said that they will have to change the show’s name, considering the date.)

But back to to last night’s performance. With a voice that seems limitless in range, energy and style, this woman can sing. I had mentioned in a previous post that she’s the love child of Ella Fitzgerald, Billie Holiday and Sarah Vaughan. And guess what? She honored these three ladies by singing a few songs in their unique style. Uncanny.

What a grand way to open this exciting new Rogers Park venue — a space that’s brimming with potential in an area of town that’s quickly becoming a significant cultural center.

I think AHC is the first major act they’ve booked, and it’s clear they have some kinks to work out. Mainly: the valet (chaotic and slow), the cocktail service in the theatre (overwhelmed) and the food at the attached Act One Cafe (barely edible).

Furthermore, as my friend Steve quickly pointed out, the sound in the space is in severe need of an overhaul. The speakers are high above the stage and pointed to the back of the house, which is completely counter-intuitive to Mayne Stage’s intimate space. We had front row seats, and the sound we heard was the echo bouncing off the back wall. They need a front fill, or whatever you call it, to make the aural experience pleasurable for the entire audience — not just for those in the last three rows.

However, these are mostly minor things that can be worked out over time. I hope they continue to bring in top talent — and promote the hell out of it! — to ensure this venue finds its footing.