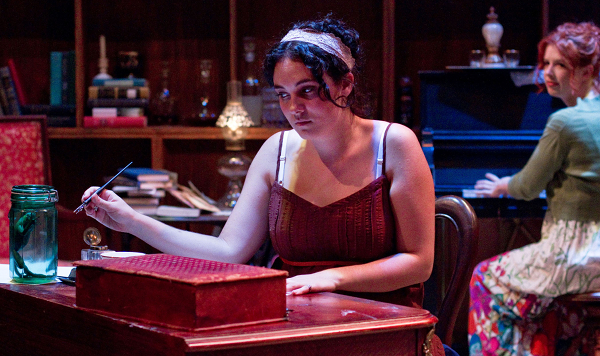 What happened that infamous, rainy summer in 1816 when Mary Shelley, Percy Shelley, Lord Byron, John William Polidori and Claire Clairmont rented a villa near Lake Geneva? What dynamics were occurring amongst them to cause the unassuming Mary to conceive the basic story line for her gothic novel Frankenstein: or, The Modern Prometheus.

What is commonly known is Lord Byron challenged them to see who could write the scariest ghost story, and Mary bowled them all over with her disturbing tale of the mad Dr. Frankenstein. In her diary, Shelley credits a “walking nightmare” as the impetuous for her story. But beyond that, it’s relatively undocumented what else may have occurred to inspire her to pen such a thing. Playwright Emily Dendinger attempts to answer these unknowns in her heartfelt, but long-winded, Hideous Progeny, which blends factual events with semi-fictional dramatizations.

And what dramas they are! There’s infidelity, wronged hangings, secret pregnancies and unrequited loves, just to name a few, topped by a giant heap of writer’s block. The action is contained in the parlor of the group’s rented villa.

The problem here is you get a bunch of head-strong poets together in a room, and they all start sounding off like a bunch of pompous buffoons. You don’t really like any of them, with their “me me me” attitude. So by the time they do start showing remorse late in act two, you’re not sure where it’s all coming from.

Director Jessica Hutchinson attempts to tamper this lit-speak by stripping the performances from any stagey British affectation. In other words, no stuffy English accents. This both contemporizes the piece while making it more universal. The performances shine as a result, particularly Hilary Williams, whose Mary Shelley is wise, warm and wounded.

However, the script still is a bit of a snore, with a seemingly minor conflict that bubbles to the surface in act one — something to do with the cousin of Shelley’s sweet French maid (played wistfully by the adorable Madeline Long) who’s in some sort of legal trouble — occurring offstage, making it really hard to connect with this group’s plight when it drives them apart in act two. And maybe because I’m not up on my romantic lit history, I wasn’t really sure why this dare they had placed on each other carried such weight. Am I missing something? Some director’s notes in the program might have helped. The teary goodbyes that close the play could also benefit from trimming. As any poet will tell you, less is more.