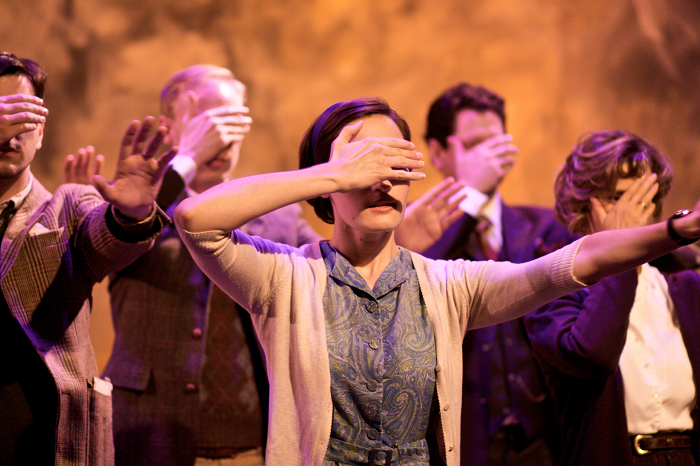 The cast of Sideshow Theatre Company’s “Theories of the Sun” engage in a metaphorical game of blind man’s bluff.

So, two famous playwrights and a pair of women walk into a hotel bar.

No, this isn’t the setup for some raunchy joke, but the unique premise for Kathleen Akerley’s lyrical, haunting and cerebral Theories of the Sun. Receiving its midwest premiere by Sideshow Theatre Company at the recently opened Theatre Wit, this is a delicately constructed piece about mortality, hope and the power of storytelling. And if the wordy and oblique speechifying, which dominates most of act one, causes your mind to drift, a unique mystery element surfaces that keeps you leaning forward to conclusion.

It’s 1963, and two Americans, Barbara and Elizabeth Sweeney (Susie Griffith and Scottie Caldwell, respectively), have traveled to a remote hotel in France to receive some peculiar testing by a nebbish doctor (Jesse Young) who specializes in rare diseases. While they think they’ve found a hidden location to receive this testing, they soon discover a wound-up Tom Stoppard (Matt Fletcher) and a boozy Tennessee Williams (Andy Luther) camping out at their hotel. These two literary icons provide comedic relief — thanks in large part to the show-stealing performances of Fletcher and Luther — in a show that could easily become an over-indulgent chore.

A mysterious scholar, by the name of Mr. Asher (Dylan Stuckey), also hangs out around the hotel bar, and captures Elizabeth’s attention. Asher tells Elizabeth (who’s getting this mysterious testing by the doctor) about various theories of the sun he’s collected from his travels and research, and, in doing so, seems to entrance her. To add peculiarity to an already fantastical setup, only Elizabeth can see Asher. And at one point, she joins Stoppard and Williams for a dreamlike game of blind man’s bluff (which is symbolic for something, I’m sure). What’s going on here?

It’s clear this play is operating on a somewhat different plane — somewhere possibly not of this universe. Akerley, a respected, D.C.-based playwright, beautifully grounds the mythical and symbolic elements with real human emotion. What keeps this piece from floating above your head too far is the sobering theme of mortality — a theme that emerges later in act one. If you’re one of those people who looks at life as a slow path to decay and death, then this play is for you. If you consider life full of hope, light and discovery, this play is also for you.

Directors Jonathan L. Green and Megan A. Smith (what’s with the initials?) with assistance from choreographer Katie Spelman, compliment the script’s lyricism with hypnotic movement. Lighting design by Jordan Kardasz is among the most beautiful work I’ve seen in storefront theatre in a long time. And strong acting from a tight ensemble makes the sun shine brightly on this play.

Following the show: Katy Walsh of The Fourth Walsh and I hung out in Theatre Wit’s lobby (by the men’s room, per usual, as Katy pointed out) at the post show party to partake in the complimentary Charles Shaw. Always the star searcher, Katy spotted Nora Dunn standing in the corner. We introduced ourselves (as in, Katy introduced us), and photo ops commenced. Dunn is a lovely woman — very down-to-earth. We chatted briefly about how nice the new Theatre Wit space is, and of the shows we saw back in its Bailiwick days. A Chicago resident now, Dunn was there to support a friend in the show.