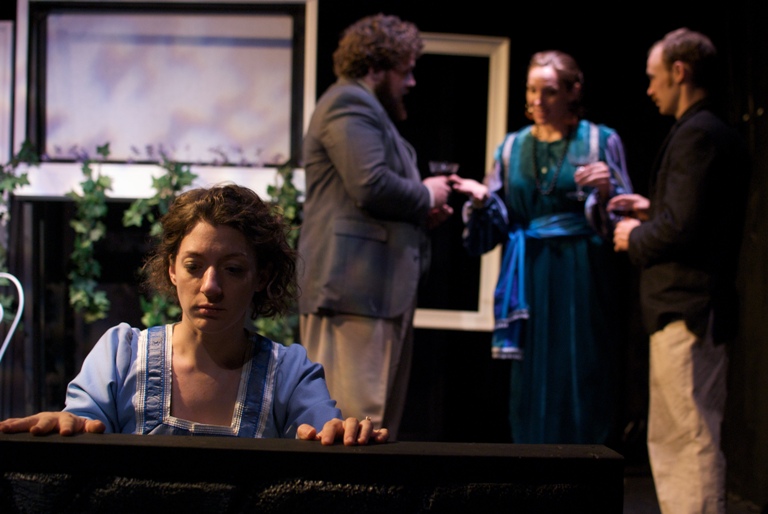 Clovis just wants to sit at the same table as the boys.

It’s 1874 in Paris, France, and Clovis (Carrie Hardin), a once talented painter in her own right, is going through a rather dark period. The vivid, creative girl she once was has turned into a broken woman — a dutiful wife who concentrates on dinners and gardens rather than nurturing her craft as an artist. We come to learn that she burned all her paintings — perhpas as a symbol of the death of her passion. Even more painful, her husband (Michael John Krystosek) is a successful artist and an organizer of the impressionist salon. The only role Clovis now plays in the art world is servant to other artists and an object of the male gaze when posing nude for paintings.

In the late nineteenth century, it was nearly impossible for a female artist to achieve the same level of respect as her male peers, and Heather MacDonald’s play Dreams of a Common Language examines this challenge using the rise of the impressionism movement, where woman were excluded from discussions concerning technique and craft. They weren’t even allowed to paint in public spaces.

Prologue Theatre Company’s production takes a while to find its footing, with numerous blackouts and the use of fascinating silhouette puppetry (designed by Catherine Matchatte) that isn’t as fully integrated into the piece as one would like. But about 30 minutes in, the show fully engages. This is mainly due to the introduction of Pola (Lara Janson), a fiery female artist who is enraged by gender inequality in the arts. When she’s regulated with Clovis and Clovis’ mother Delores (Hayley L. Rice, doing a commendable job playing three times her age) in the back garden while the boys discuss the business of art in the dining room, the play takes a lively turn at the end of act one.

Director Margo Gray leads a very strong cast through this important play with care and craft. However, I wish MacDonald’s work wasn’t so one-dimensional. It feels like a message play — it’s difficult to emotionally connect with positions in the place of real people. For example, just look at the artificial way Clovis interacts with her son (Alex Knell) — but that’s not really her fault, as her son seems treated by MacDonald as a symbol of Clovis’ marital suffocation. Fortunately, these talented actors do all they can to inject life into their underdeveloped roles (particularly Hardin), and the final scene where Clovis bares her soul and reclaims her passion is quite remarkable.

One thought on “Nudie revue: Prologue Theatre’s ‘Dream of a Common Language’ bares all”