Can we say gayest weekend ever?

First up: a viewing of that classic 1967 film, “Valley of the Dolls,” at the Music Box Theatre. If you know anything about me, or if you want to know anything about me, I take my VOTD quite seriously. I’ve thrown VOTD viewing parties. I’ve read Jacqueline Susann’s book. I have songs from the film’s soundtrack on my jogging playlist. I may have adopted a Helen Lawson twitter alter-ego (don’t judge me).

So, when my friend Jamie and I found out about this special viewing earlier this fall, which promised a special guest appearance with the real Ms. Neely O’Hara herself, we scrambled to get our tickets. However, the thing was instantly sold out. Harrumph. But no worries: Ms. Patty Duke “done got herself a Lifetime movie,” as Jamie emailed me one morning, “and the event has been rescheduled!” So, lucky for us, La Duke’s rescheduling allowed us to get tickets for the second time around.

We attended the 1pm showing yesterday afternoon expecting all the great cinematic moments, including:

But, this being my first time at the Music Box Theatre (for shame!), I wasn’t expecting a 30-minute pre-movie show, which included a VOTD costume parade (led by outlandish host Richard Knight, Jr., president of the Queer Film Society), a sing-a-long to the movie’s soundtrack, and special appearances by “Jacqueline Susann,” “Helen Lawson” and, of course, Patty Duke: 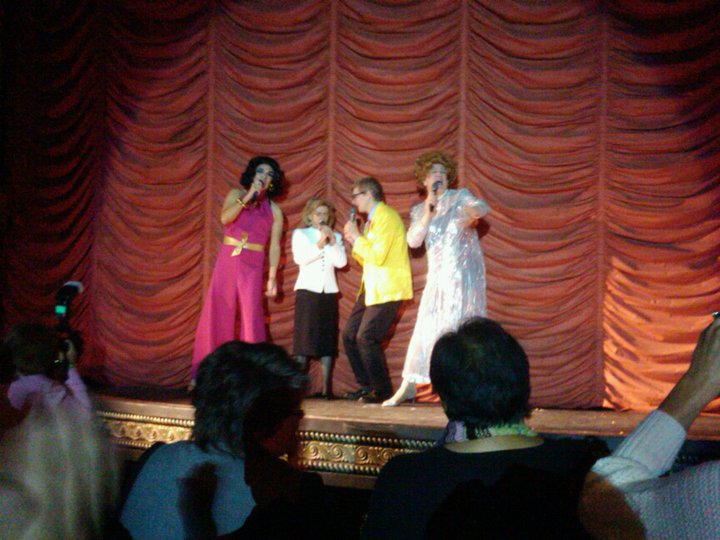 Look how tiny La Duke is!

Interestingly, at both the Music Box event and Miranda Sings, we were encouraged to use our digital gagetry to capture the ongoings. So, like good near-millennials, we did. I mean, how else would classic moments like this be documented for future generations? (Skip to 1:08):


[Video courtesy of Gator and his new iPhone 4 (which I bought him for his early birthday present. You’re welcome, Gator).]

So, after the pre-show show, the curtain rose and the film started. And man, this audience knew their VOTD. We clapped for all the star entrances, hissed whenever anyone mentioned “Helen Lawson,” applauded heartily at the cross-your-heart necklace moment, and yelled at Barbara Parkins to “snap out of it!” whenever she offered one of her many vague camera stares. And then people just yelled at the screen. It was absolute mayhem — like watching a film with a few hundred of your funniest friends.

Following the film, La Duke came back onstage for a Q&A, and proved what a true spitfire she is. She talked about what a horror it was working on the movie (due to director Mark Robson’s abrasive on-set attitude), and how she genuinely thought she was making a serious, Oscar-worthy film. Surprise! She also thanked the gay community more than once for allowing her to no longer feel ashamed about her work on the film. She’s a real chatter box, and it seemed like she could have gone on for hours if we didn’t have to clear out for the 5pm film.

After a quick (and very tasty) dinner at Cullen’s Bar and Grill (get the onion rings!), Jamie and I fought our way through the crowd leaving the Northwestern-Illinois game at Wrigley Field and hopped in the car up to head up to Highland Park for some “Miranda Sings.”

‘Miranda Sings’ at The Music Theatre Company
As I noted in my recent interview with Miranda creator Colleen Ballinger, I’ve been a fan of Miranda’s (a “Mirfanda”) since I discovered her YouTube videos early last year. So, it was a real treat to see her bring this unique character to a live audience. A very young (and sold-out) audience, I might add. I would guess the average age in the 100-seat Music Theatre Company space was around 17. At one point in the show, I pointed out to Jamie that nearly everyone had a camera or smart phone out documenting the event. One kid was even “live blogging.” Instantly, Jamie and I felt both strangely old and technologically under-represented.

But back to the show. The young Ballinger demonstrated that’s she’s a true comedienne, capable of fully committing herself to the endearingly aggravating quirks of her YouTube counterpart for the entire 1.5 hour show. Miranda is cocky, abrupt, awkward, self-absorbed, oblivious and completely entertaining. But it wasn’t just all bad singing, awkward mugging and facial ticks. She read emails from her “haters,” sang duets with a few golden-voiced male performers (which were really just Miranda solos interrupted by someone else), and gave a ridiculously egregious voice lesson to a talented young performer named Malynda Hale (who has her own popular YouTube channel. Don’t we all?). In other words, her character really shines when she interacts with others.

And then, in my favorite part of the evening, she showed us her “fifth threat” (she’s already a singer, actress, dancer and model): magic. I could attempt to describe her magic talents,  but one of the eager Mirfanda’s recorded it last night:

I will say that the 1.5 hour running time was just enough, and I appreciated that she sang only two-minute segments of each number (with Will Buck providing expert piano accompaniment). Any more, and I would have been over it. And I do think Ballinger could have introduced a few more props and costume changes into her performance. But, overall, a very fun evening.