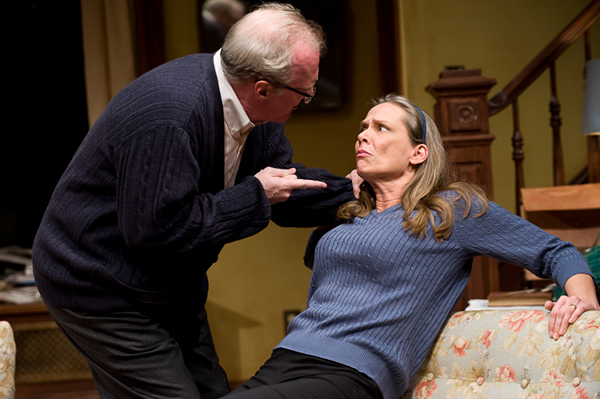 I once had a friend who was a chronic liar. Well, lying isn’t the right word — let’s say she made up her own reality. She would tell me stories of boyfriends she had or people she’d hooked up with or crazy things that had happened to her that never happened. I knew, because in many cases, I was present when these things took place. However, she’d tell her highly augmented version of these stories (which grew more ridiculous over time) for so long, to so many people and with such conviction, I honestly believe she’d convinced herself they were true. I assume she did this because it helped her cope with the harsh realities of life. And shaking her into reality would be like waking a sleepwalker making her way down a long flight of stairs.

It was freaky — and more than a little sad.

Watching Steppenwolf’s electric production of Edward Albee’s Who’s Afraid of Virginia Woolf reminded me of this person. Married couple Martha and George have constructed their own reality. They play complex mental games with each other that, over time, have become their entire world — a world that thrives because they each support it, and use it to manipulate, titillate and abuse each other. It’s a giant, booze-drenched emotional wirbelsturm that changes course as often as the drinks are poured, and woe to any passersby who should walk into it, or be present when it comes crashing down.

That’s why the brilliant Albee throws Nick and Honey into the mix — a naive couple who are newcomers to the small, New England university that serves as the very American setting for this American tragedy. In his play, we are voyeurs into this dysfunctional relationship for one night — but not just any night. This is the night where years of game playing between Martha and George come roaring to a screeching halt, and Nick and Honey are simply roadkill in the wake.

I’m only familiar with the 1966 movie version of Woolf, starring Richard Burton and Elizabeth Taylor. In it, Taylor gives the performance of her career, offering a smokey, blowsy, barb-slinging Martha, full of diva attitude. Amy Morton is no Elizabeth Taylor. But that’s a good thing. Her Martha is smart, angry, sad and emotionally needy. You sense that her gruff, midwestern exterior is seconds away from disintegrating into a nervous breakdown. And her tall, handsome figure lends to some believable sexual danger — you could see why Nick (Madison Dirks) is attracted to her beyond simply beer goggles.

But it’s Tracy Letts’ George that holds court in this deranged kingdom. His George is intense, pressurized, dangerous and laser-focused. Here is the diva performance that Morton eschewed. Through Lett’s bravura turn, the balance tips more toward the George side of things, where in the movie, you felt Taylor’s Martha pulled the strings. The results are amazingly entertaining and fascinating, and provide for ample discussion on the cold red line ride home.

5 thoughts on “Steppenwolf’s ‘Who’s Afraid of Virginia Woolf’ is taught, thrilling and unexpected”