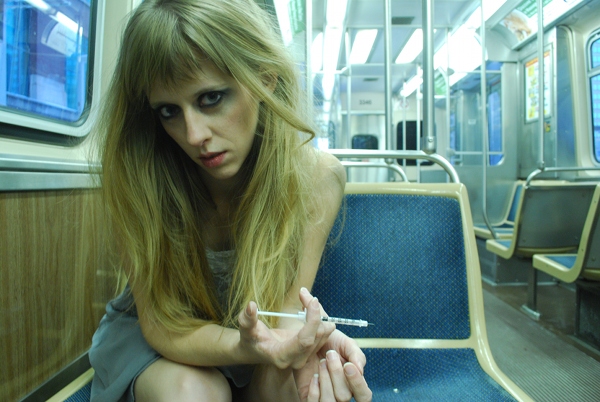 Now here’s a piquant press photo provided by Red Tape, though hardly representative of the show.

Religion is a wacky thing. We all are inherently good. But we’re all sinners. Some of us connect with a higher power by going to church, some try to lead better, more spiritual lives by turning to life coaches. But do these people really know what they’re talking about, or are we all just as insecure and fucked up as the next person? How do you love a higher power if you don’t love yourself? What is faith? Does faith mean you have to believe all those zany bible stories — i.e., Jesus turning water into wine and immaculate conception?

Young Jean Lee has written two plays — Pullman, WA (which makes up the first act) and Church (the second act) — that challenge the notion of spirituality and institutionalized religion. The pieces, both smartly directed by James Palmer, are highly immersive affairs involving neurotic individuals who have found a higher calling and want to reveal the secret to their enlightenment with us.

In Pullman, Wa, which I found the more satisfying half of the evening, they mostly fail at doing so. As the first of three people attempting to tell a fully-engaged audience how to live a better life, the fantastic Amanda Drinkall Reader kicks off things on a high note. Her confident, smart exterior quickly crumbles as she struggles to find the words to explain the secret to happiness. Her two colleagues take over, starting off with pious confidence, only to be overcome by crippling insecurities moments later. “You suck!” they yell at each other and, quite literally, to your face.

Then act two begins, and we’re shepherded into a room resembling a church daycare center, complete with carpeting, crayons and crucifixes. We’re at a church service. Our spiritual leaders for the evening, again, are all deeply flawed and struggling with spirituality, yet, for the most part, are far more successful at communicating the secret to their inner happiness than those in act one. They take us along their journey of self-discovery through long, winding and, at times, comically nonsensical sermons. Some of them deliver their messages in pitch black, as if to further disorient us. There’s dancing and there’s singing. It’s a curious, comical and, ultimately, long-winded piece that overprays its welcome. How much forced hand clapping can one do in an evening?

While pairing these two similar pieces together makes for a somewhat repetitive affair, the intelligence of Lee’s work still shines through — particularly in the unexpected way she examines organized religion. At first glance, it seems like she’s brutally mocking it, as the characters (repeatedly) ramble off ridiculous pseudo-religious parables involving mummies, unicorns, ball sacks (yup; you read that right), mermaids, and more. One of my favorite lines (and I’m paraphrasing here) is: “Jesus is like a vampire! You have to invite him into your heart!” It’s all nonsense, Lee seems to be saying, and just like corporate america, the religious world is filled with its own special brand of jargon. However, there are also several moments, particularly in the second act, that seem to be making a rather solid case for organized religion and the sense of community it offers. Especially the final moments of the evening: without giving away any spoilers, it’s a surprising and joyous conclusion.

I’m trying something new for 2011 — a CTA Index Rating. I’m going to rate each show on a ten-point scale. This way, I will be able to more effectively track my theatre-going habits and history.

CTA Index Rating: 7.5 (Interesting observations are told in a comical and intelligent way, but I grew tired of the same message being preached at me for two hours.)