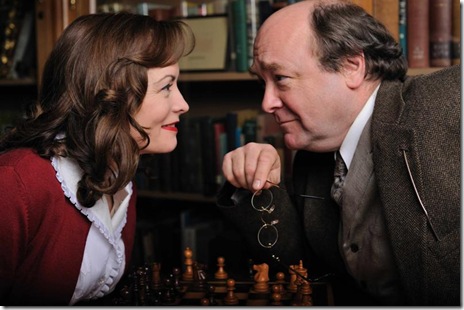 “Pain is God’s megaphone to rouse a deaf world.”

That famous quote, drawn from one of C.S. Lewis’ many essays about religion and faith, is core of William Nicholson’s 1985 play (which was later made into an acclaimed film co-starring Anthony Hopkins and Debra Winger) which documents the true love story between the world-renowned writer and professor, and a smart, lonely American woman named Joy who bursts into his life unexpectedly. For it’s through pain that we’re reminded that we need the Lord’s help, Lewis argues, otherwise we grow complacent with self-sufficiency, and turn away from Him.

Shadowlands is a tragic love story — I’m not giving anything away by telling you that Joy dies shortly after they meet — but the story behind how the emotionally guarded Lewis (who we learn is called “Jack” by those close to him) slowly allows Joy to break down his barriers and awaken his heart is remarkable. And Provision Theater Company’s straightforward production is filled with honest moments clearly defined by Brad Armacost and Susan Moniz’s smartly-crafted performances as Jack and Joy.

But back to that quote. It’s the age-old question of “If God exists, why does he allow horrible things to happen?” We learn that Lewis experienced great loss when his mother died of cancer when he was eight. But when Joy passes from the same fate, these emotions surface again, and Lewis must grapple with his own struggles with faith. On paper and in theological debate, this megaphone metaphor holds up, but when great pain is experienced first had, intellect is overcome by emotion. How do you reconcile the two, especially when you’re the great mind of C.S. Lewis?

I have to admit that I was crying like a baby at curtain call. Which is rare for me. But I’m a sucker for a tragic love story, and I could relate with Lewis, who fully expected to go through life a single man, but this rare thing came into focus unexpectedly — and though it shook him to his core, he knows that his life was better lived by loving. As the buttoned-up Lewis cries out to Joy as she fights for survival: “I love you, Joy. I love you so much! You made me so happy. I didn’t know I could be so happy.”

I mean, how could you not tear up at that?

Ok, so it’s not he most expertly crafted play (the writing is a little heavy-handed at times, as evidenced above, and there are sloppy moments that attempt to tie in the otherworldly qualities that permeate Lewis’ many writings), but it certainly is a beautiful love story worth telling.

CTA Index Rating: 8 out of 10 (A remarkable and true love story is given a simple, straightforward and well-acted retelling, even if the play isn’t the most expertly crafted.)