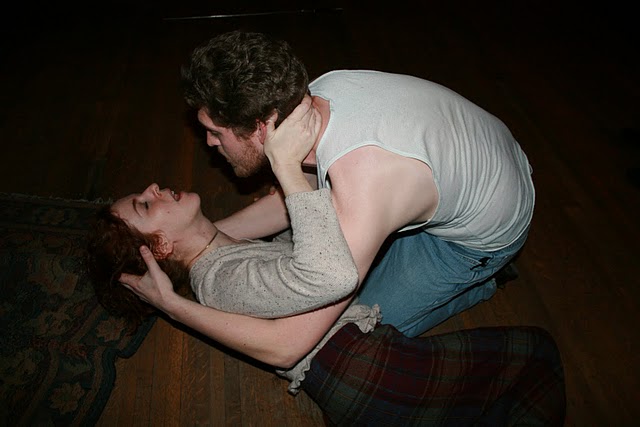 That deeply vengeful (yet slow-to-act) Hamlet has taken residence at Gunder Mansion on the corner of Sheridan and Granville. There, DreamLogic Theatreworks, under the direction of Scott McKinsey, is presenting a powerfully intimate promenade staging of Shakespeare’s classic revenge tragedy.

Well, actually only the first floor of the beautiful historic home.

I have to admit that, typically, promenade staging quickly grows wearisome for me. All that standing, craning of necks and making sure you aren’t sitting on a piece of furniture required of an actor. And this is especially the case when we’re talking about a three-hour Shakespeare play.

McKinsey starts off very strong with his production, with scenes logically leading between the four main rooms of house’s first floor. And there are moments throughout, such as when Hamlet (a fantastic Jack Sharkey) confronts the ghost of his father and the expertly choreographed sword fight between Hamlet and Laertes, that shine. Yet, there are also some very key moments, such as the stabbing of Polonius through the curtain, that lose their impact because the action is isolated to another room altogether.

Such is the challenge with the promenade.

It’s during the second act that the weariness sets in. The action remains grounded on the first floor, with the actors required to run from room to room to indicate a change in time or space. You better keep up! It would have been nice to have gone up that flight of steps and seen what happens above — where the king and his queen dwell. (Prologue Theatre’s production of Sex used the upstairs of this mansion to good effect). If you have access to this unique space, use the hell out of it, I say!

But, aside from the gimmick of a promenade staged Hamlet, the real reason to see this production is for the fearless, honest performances. Most notably, Sharkey is a force as Hamlet, giving a deeply conflicted, intent-yet-frantic take on the haunted prince of Denmark. As his long-suffering, tear-stained, wanna-be girlfriend, Alexis Meuche makes a major impact as Ophelia. Rob Glidden also steals every scene he’s in as King Claudius’s bumbling chief counsellor Polonius.

CTA Index Rating: 8 out of 10 (A powerful, energetic production, filled with talent, that could use a bit more variety in its staging.)

“Hamlet,” presented by DreamLogic Theatreworks, plays through March 5 at the Gunder Mansion, Home of the North Lakeside Cultural Center, on Friday and Saturday evenings. All shows feature an open bar. More info here >