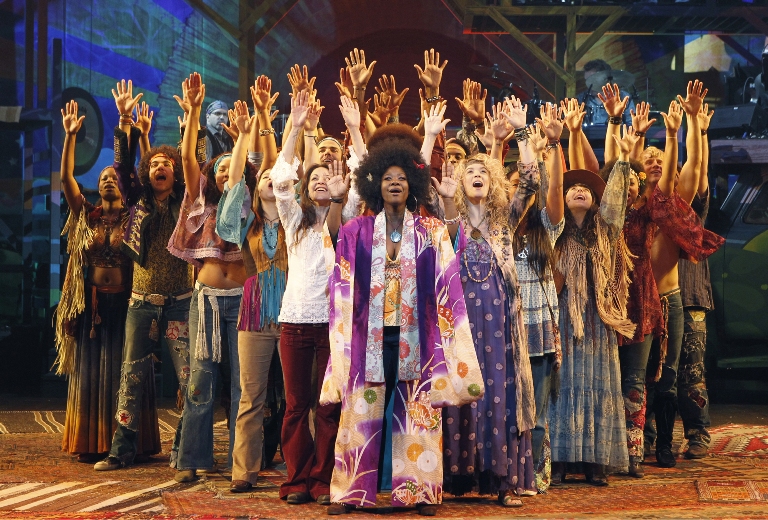 The dawning of an age: the national tour of “Hair” brings harmony and understanding to Chicago.

A tribe of long-haired miscreants (read: hippies) has camped out at the Oriental Theatre to take us on a hallucinogenic tour of the late ’60s when it was all drugs, sex, rebellion, protesting and hair, hair, hair.

Hair was a phenomenon when it opened on Broadway in 1968. Hippies singing about LSD and free love, simulating those acts on stage, burning draft cards and full-frontal nudity? The Lawrence Welk set didn’t know what hit ’em.

Now, such things rarely shock us. The hippie culture, in retrospect, has left a charming, even sentimental, aftertaste. But what these flower-power bohemians had that continues to resonate are undying passion, unending respect for each other and fierce loyalty — three traits that never go out of style, but perhaps out of practice. When they believe in something, they throw heart, body and soul into it. The musical Hair celebrates this passion, and this rocking national tour recreates the hit 2009 Broadway revival that was inspired by a landmark 40th anniversary production at the Delacorte Theater in Central Park in 2007.

So, how does this period piece play out today? Surprisingly well — particularly the powerful final moments when the harsh realities of war bring a chill of sobriety to the tribe.

But I had some significant qualms.

While director Diane Paulus has let (what I’d imagine) the original spirit of the piece ring loud and true, several details kept reminding me we were watching a production of Hair in 2011. First there’s the issue of casting. Yes, it’s a young, attractive and diverse cast, and they fiercely throw themselves into the spirit of the counterculture movement; however, more than a little credibility is lost when looking at the lineup of washboard abs, perfect pecs, professionally cut and highlighted locks and pearly white smiles. It’s the age of the Aquarius, Abercrombie style.

And while the singing is impressive (most notably Phyre Hawkins, who opens the show with the most well-known anthem, “Aquarius”), it’s frequently affected by the American Idol-esque stylings (aside from two notable exceptions: Kaitlin Kiyan, who gives a simple and plaintive “Frank Mills,” and Caren Lyn Tacket as Sheila, who offers an unfussy “Easy to Be Hard”). As a result, Galt McDermott’s amazing score (with lyrics by Gerome Ragni and James Rado) comes off a little overworked.

And there are other minor inconsistencies that add up to a larger whole: the modern head-mics; the ever-present automated LED lighting systems; a professional lace-front wig (where would hippies acquire such a thing?) worn by an actor in drag; a reference to the “Windy City” when the show takes place in New York. Such things kept pulling me out of time and place.

Yet, it’s surprisingly easy to overlook these many faults when everyone’s heart is in the right place. As I said, the spirit is definitely there — the energy positively radiates out into the audience, and eventually back up onstage when you’re invited to hold hands and sway with the cast to a never-ending chorus of “Let the Sunshine.”

CTA Index: 7 out of 10. (A spirited — yet, at times, inappropriately slick — revival of a landmark show.)

4 thoughts on “I believe in love: ‘Hair’ national tour brings some flower power to the windy city”