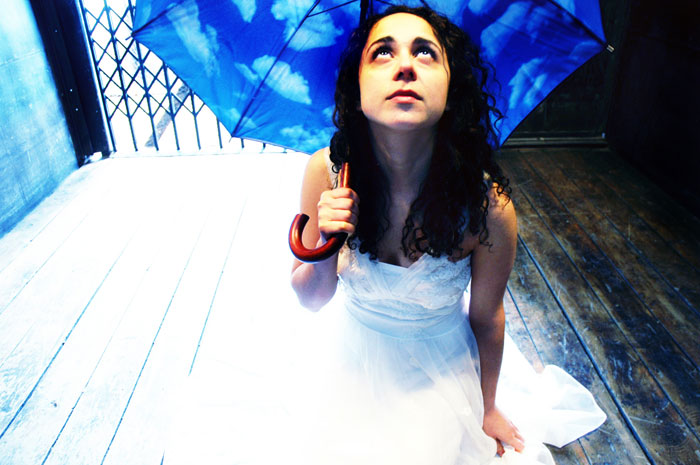 Getting to the Pilson-based loft warehouse venue for Filament Theatre Ensemble’s production of Sarah Ruhl’s Eurydice is a chore — especially on a cold, rainy Friday evening.

However, let me tell you: the effort was more than worth it.

Sarah Ruhl’s delicate, quirky rift on the classic greek myth is one of those works that creeps up on you. I’ve never seen a production of Ruhl’s play before, so at first I was all like, “oh, this is going to be a charming, twee thing.” But then I suddenly found myself tearing up watching Filament’s artfully crafted production. Which surprised me more than anyone, because it takes a lot to make me cry. The subtle beauty and slight melancholiness of the piece gets under your skin and moves you ever so slightly, to the point that you’re simply captivated.

As Eurydice, Carolyn Faye Kramer is ideally cast. The petite and child-like Kramer makes it clear that she’s head-over-heels in love with Orpheus, whom she’s set to marry, but lonely. We discover her father has passed years ago, and she wishes to hear from him to receive his blessing. The lord of the underworld (Nathan Pease, having fun with a campy, if not fully formed, role) lures her to his high-rise apartment with promise of a letter from her father. As such things go, she plummets to her death, and arrives to the underworld.

Peter Oyloe as the charming Orpheus looks the part, but doesn’t form much of a connection with Eurydice in the opening scenes. Which might be the intention, as Ruhl’s retelling seems to imply that Eurydice, a bookish, awkward young woman, really isn’t ideally paired with the confident, romantic musician — she can’t hum a tune and her eyes are hidden behind big, clumsy glasses. But when she moves on to the other side, Orpheus does everything in his power to reach out to her, including writing love letters, sending books and, ultimately, entering the underworld to barter her return.

However, the real love story is between Eurydice and her late father (Patrick Blashill), whom she reconnects with in the underworld. Eurydice’s father eagerly welcomes their reunion, but she has no memory of him, as along the way she’s been dipped in a river that causes amnesia. Eurydice mistakes him for a porter, and he plays along. In an effort to calm her frazzled nerves and forge a connection, he builds a simple house for his daughter out of twine and rocks. This is about the point when the tears began. In this one scene, director Julie Ritchey subtly establishes the love between these two lost souls, and it takes your breath away.

Ritchey uses the vast loft space to its best advantages. While the cavernous area presents a few acoustic issues (Oyloe and Shannon Bengford’s suitably pretty, if somewhat bland, original score overpowers some of the dialogue), she brings thoughtful movement to each scene, and most remarkably, Eurydice’s entrance into the underworld, which calls for a “raining elevator” in the play, is realized by an actual freight elevator in the space (which does, in fact, rain). It’s a stunning marriage of space and stagecraft.

A word to the wise: bring a blanket — the loft space was freezing Friday night. But that might not be an issue with the forecasted warmer weather.

“Eurydice” is paired with an original work by Filament associate artistic director Oman Sade, “Orpheus: Featuring DJ Puzzle as Fate.” Unfortunately I had to scoot after the Ruhl piece, but it sounds wicked cool.