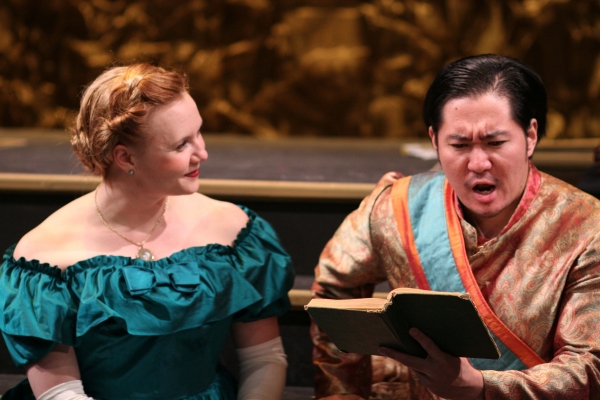 You know The King and I, right? I mean, we all do. When I saw this title on Porchlight’s season announcement last year, I have to admit I rolled my eyes a little.

Well, see Porchlight Music Theatre’s classy, intimate production, and you’ll be reminded why this show has endured. No, this isn’t some crazy conceptualization set in a mental institution, nor does it feature actors playing their own instruments. Rather, it’s a simple retelling of the Rodgers and Hammerstein classic, focusing on the relationships between the characters and showcasing that classic score. Imagine that? No fancy bells or whistles, just excellently acted and sung performances — particularly from Brianna Borger as English schoolteacher Anna and Wayne Hu as the stubborn Siamese king.

The material stands on its own, and Porchlight merely highlights its best qualities.

As far as musical love stories go, Anna and The King’s enjoys a healthy dose of sexual tension. Anna, a strong-headed widow, is immediately put off by the King’s brutish ways — his multiple wives, the kowtowing when he enters a room, the gifting of slave women. But she’s also deeply intrigued by him — and he by her bold, western ways. Borger and Hu, under the expert direction of L. Walter Stearns, explore this complex relationship with honesty, danger and more than a little humor. And Borger, who starred in an international Asian tour of the show a decade ago, brings an ease and grace to the role that makes you feel like this Anna is not only a woman who knows what she wants, but completely confident in her abilities to do so. And, as much as it frustrates him to no end, the King respects this in his own stubborn way.

The chemistry is palpable — which is so essential to The King and I.

Also essential is that score. Music director Eugene Dizon has pared Rodgers and Hammerstein’s score down to two grand pianos – with Dizon and Alison Hendrix sharing accompanying duties. R&H’s ear-friendly score lends very nicely to this grand sound — particular in numbers like “I Have Dreamed” and “Something Wonderful,” the latter powerfully performed by the eternally stoic Kate Garassino as Lady Thiang. I’d even say the use of two pianos represents the duet between the two budding romances the play: the unlikely Anna and the King and the ill-fated Tuptim and Lun Tha.

Up-and-coming choreographer Brenda Didier does some wonderful things with the act two Jerome Robbins ballet, “The Small House of Uncle Thomas” and costumes by Bill Morey adequately reflect the numerous differences between Anna and the King’s worlds — worlds that come together through a classic love story and a gorgeous score matched by a completely satisfying production by Porchlight.