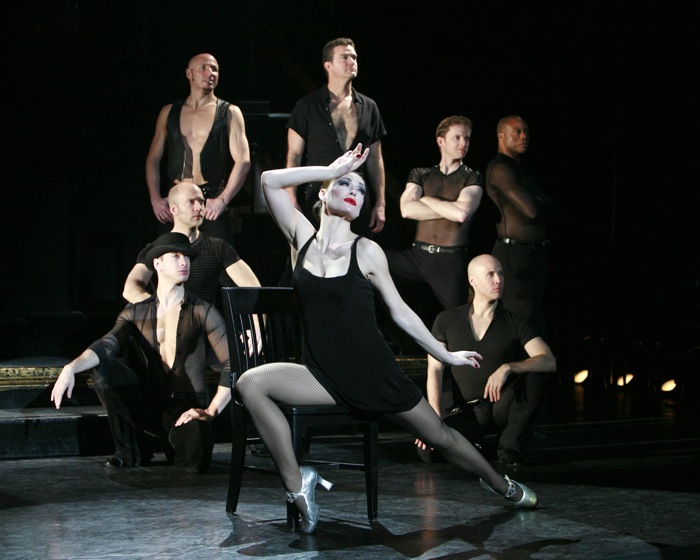 The Broadway revival of Chicago has been packing houses for 15 years. While much of that has to do with producers Barry and Fran Weissler keeping an ever-rotating cast of C- and B-list celebrities in the lead roles (currently, Christie Brinkley is playing Roxie in the Broadway production), a lot of it lies in the strength of the material.

Chicago is simply a solid show. It’s quick, funny, topical, cynical, smart, and, most importantly, sexy. It may have been ahead of its time when it premiered on Broadway for a short run in 1975 (and a little-known show named A Chorus Line may have usurped its potential audience), but today? The show’s themes are completely in synch with our sensibilities: instant celebrity, sensationalism, murder, greed, corruption, violence, etc.

And in this very fine national tour, we have the B-list celebrity power of John O’Hurley (Seinfeld, Dancing with the Stars, The National Dog Show Presented by Purina, etc.) as opportunist lawyer Billy Flynn. And O’Hurley is just about all you’d need for this role: dashing, charismatic, a touch douchey and offering a well-placed dose of cold, hard reality. And he can sing.

TV credits aside, the true stars of the show are those two killer-dillers, Roxie and Velma. Here, we have Tracy Shayne and Terra C. MacLeod, respectively. I appreciate that even though this tour has been around for more than a decade, the Weisslers are still casting mature, experienced actresses in these roles. Both Shayne (who has one of the most ridiculous Playbill bios I’ve read in some time) and MacLeod (who radiates old-school star power, even if her wig/makeup combo makes her look more than a bit draggy) have been playing these roles, off and on, since the late ’90s. It’s clear they have solid ideas about who these women are and what makes their desperate inner workings tick.

It’s a pity, then, that they don’t pair well with each other. MacLeod is selling it hardcore, and giving the best performance of the night, even if it’s a bit on the manic side. However, she’s clearly out of synch with Shayne, who plays Roxie with such straightforward, humorless drive, she nearly comes off like a Highland Park housewife who’s decided to slip into a lacy William Ivey Long negligee and be “bad” for a few hours. During her “Roxie” monologue, for example, Shayne never gets lost in the moment.

As I noted to my theatre companion last night, much like the rose Shayne attempted to toss out into the audience at curtain call, her performance never quite made it past the footlights. As a result, the story tips more toward the Velma side of the scale — which, I think, isn’t where any Chicago should land.

In supporting roles, Ron Orbach is pretty much the best Amos (“Mr. Cellophane”) you’ll likely see, Roz Ryan is appropriately lecherous and dangerous as a butchy Mama Morton (her “Class” with MacLeod is a highlight), and T.W. Smith hits all the right notes as Mary Sunshine.

The material clips along with precision and energy, and the well-rehearsed cast (which is also filled with some mature, experienced dancers) do Bob Fosse (as interpreted by Ann Reinking and recreated by Gary Chryst for this tour) more than proud. The onstage band, which is chock-full of local musicians, wails on that Kander and Ebb score — one of the best scores in the musical theatre.

With this my third time seeing the Broadway revival version of Chicago, I left satisfied, if longing for a bit more heat.

3 thoughts on “‘Chicago’ keeps razzle-dazzlin’ ’em, even if the chemistry’s a bit off”