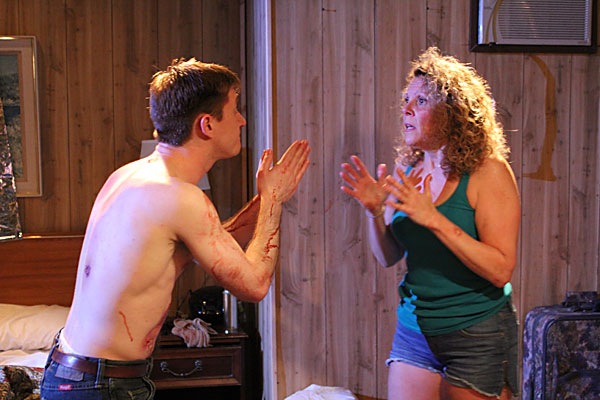 I know someone who has an unequaled fear of bed bugs. Even mention the word “bed bugs” within earshot of this person, and they’ll start nervously looking around the room, as if, like Beetlejuice, the mere mention of the name will summon these blood-sucking nuisances out from the ether and onto their skin.

I’m sure they’d empathize with Peter Evens, the quiet, unassuming young man in Tracy Letts’ play who has what one might call a hostile fear of aphids. Bio-engineered aphids that are implanted in you during your military days to spy on your goings on, maybe, but aphids nonetheless.

But these pesky critters aren’t something a little digging into the body with tweezers and pliers can’t fix.

Letts’ psychological drama has a long pedigree with Chicago roots: it premiered in London in 1996 after rehearsing at Chicago’s A Red Orchid Theatre, and then opened at A Red Orchid Theatre in 2001. It then became an Off-Broadway hit and later a 2006 movie starring Ashley Judd and original star Michael Shannon (I saw the movie — it was alright. The play? Better!).

And Redtwist proudly carries Chicago’s relationship with this work forward with their compact, intense production — a production that’s been getting a lot of buzz and recently announced an extension last week. So, I decided to check it out.

Before I go any further, I just gotta say: see this production. You’ll thank me later.

Directors and designers Kimberly Senior and Jack Magaw transform Redtwist’s storefront space into a seedy rural Oklahoma motel. The audience flanks the sides of the motel room. I sat right next to the bathroom, where some very key scenes played out just feet away from me in graphic detail. Stage blood may have gotten spit on me. It was disgusting and awesome. Live theatre, baby!

This dingy dwelling is where Agnes (played with subtle intensity and weary realism by Jacqueline Grandt) hides out when not working her dead-end, part-time job to pay for her drink and drugs. Agnes’ lonely routine is shaken up when her lesbian friend (Karen Hill) introduces her to Paul (Andrew Jessop, who plays paranoid very well). Paul’s sincere attitude seduces Agnes into his web of craziness, and they’re soon both picking away at bugs that may or may not be there.

Agnes may not at first believe in Paul’s paranoid mission, but she goes along with it, because, as Agnes says, “I’d rather be talking about bugs with you than nothing with nobody.” But at the end of the play, her perspective shifts — quickly and dramatically. It’s a remarkable look at the evolution of paranoia by Letts.

Just like their outstanding production of The Pillowman, Redtwist has another hit on their hands. To accomodate the crowds, they’ve extended the play’s run, which conflicts with their next production, That Face (which also stars Grandt). However, they’ve accommodated the demands and are running Bug in rotating rep with That Face beginning July 9.

“Bug” plays through July 31, in rep at Redtwist Theatre with “That Face,” a Chicago debut by British playwright Polly Stenham. More info here >

One thought on “Raid resistant: Redtwist’s hit ‘Bug’ keeps nibbling away ’till July 31”