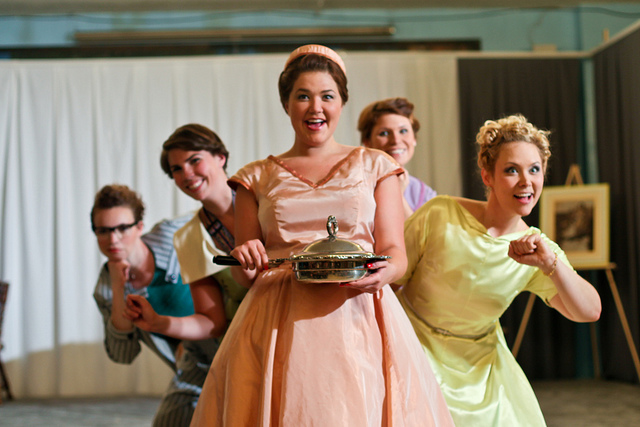 Since when did theatre become so serious?

It’s been weeks — maybe months — since I’ve really laughed at a play. I mean, belly-achin’, nearly-wet-myself laughed. And this includes my recent visit to Second City where I saw the smart but somewhat dour South Side of Heaven.

Well, The New Colony offers that much-needed release in their ridiculous and riotous 5 Lesbians Eating a Quiche — a biting little satire about five “widows” who make up the board of the Susan B. Anthony Society for the Sisters of Gertrude Stein as they fight to maintain a sense of decorum as their annual quiche breakfast goes off the rails and transforms into an impromptu coming out party.

Quiche comes at a great time. Not only is it a perfect summer show (running at a breakneck 60 minutes), but it expands on the hullabaloo caused by the film Bridesmaids where movie critics are now telling us that female comedians are now funny and it’s suddenly ok for them to misbehave onscreen (and onstage)*.

So, if you’re into that sort of thing, this show is filled with funny female comedians misbehaving.

These fantastic five performers (who each had a hand in devising the show, thanks to The New Colony’s uniquely collaborative approach to producing new work) make up one of the hardest working casts in town. You laugh because they commit so wholeheartedly to the wacky world they’ve established. Moreover, just when the joke starts to grow a bit stale, they up the stakes and the comedy is whipped into a frenzy.

I was also fascinated by the way they’ve expanded the show from its original 15 minute sketch form, which I saw last year as part of Sketchbook X. The spirit of that original piece remains intact, but the characterizations have grown — particularly Mary Hollis Inboden’s Lulie Stanwyck — a strong southern woman with a domineering streak (and a half-baked secret).

Now, one could quibble that The New Colony is perhaps a bit too overly fascinated with producing stories about people coming together for an annual event (usually food-related) and then something happening to turn the entire tradition on its head. Such was the case with Pancake Breakfast and 11:11. But where Pancake Breakfast was over-served and undercooked and 11:11 needed some spice, Quiche hits the spot.

*Clearly I’m being facetious. I loved “Bridesmaids,” but after reading the reviews and media coverage of the film, I’m annoyed that so many critics suddenly seem surprised to learn that woman have a raunchy sense of humor. Where did this come from? Cleary they don’t know any of my female friends.