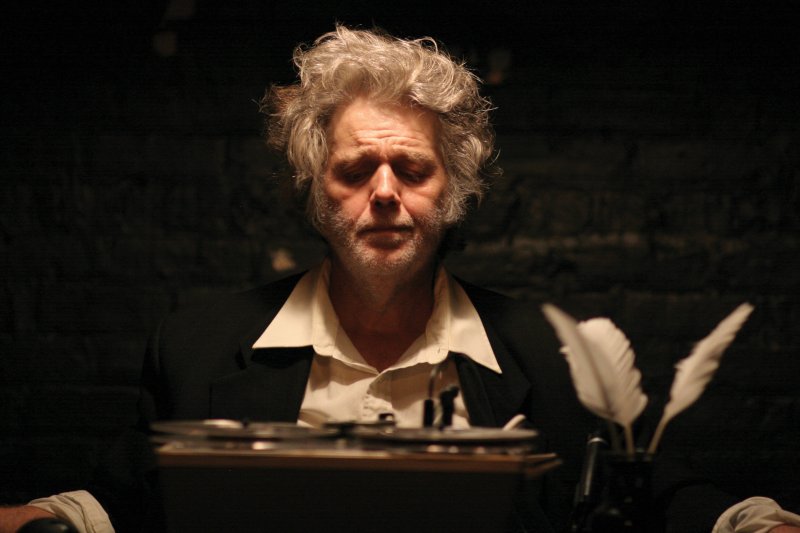 You either love Beckett or you loathe him, they say. I’ve loathed and eventually learned to love the avant-garde Irish playwright. I recall leaving Steppenwolf’s Endgame last year confused and, well, let’s just say … disengaged. However, the show has stuck with me as I continue to search for Beckett’s underlying meaning. And if that’s not an indication of good theatre, I don’t know what is. It’s a hard pill to swallow, but I’m starting to deeply admire Beckett.

The seeming simplicity of Krapp’s Last Tape might present a significant challenge to Beckett newbie. A one man show with no real plot to speak of, long pauses filled with silence and uncertainty, and incredibly sparse dialogue — a lot of it pre-recorded and endlessly repeated — can prove taxing.

But, if you look at it as study of regret, it’s a beautifully complex masterpiece.

In Signal’s thoughtful production (directed by Aaron Snook with some clever, but not obtrusive, staging tricks), we are escorted into a room (Signal’s performance space, gutted and painted black from floor to ceiling). When we enter, we see a small row of chairs for the audience (six chairs in my case, as there were only six audience members last night — including me) opposite a writing table with recording equipment.

We take our seats, and are soon engulfed in complete darkness. We have become part of Krapp’s tragic world — a world filled with missed intentions and habitual dependencies.

After a few moments of silent darkness, in enters Krapp (Vincent L. Lonergan), a disheveled old man who promptly begins his seemingly pointless rituals of locking doors, shuffling about, eating bananas and noisily rifling in a back room — which is actually behind us, forcing us to crane around in our seats (one of several unique directorial choices by Snook). Then, in the meat of the play, Krapps listens to tapes of himself recorded decades earlier, where he’s suddenly smacked with the reality that his life’s intentions may have been for naught.

After all, it’s downright scary to think that one day, when we look back on it all, we may find ourselves saying: How did I end up here? Did I live the life I wanted to live? Was it all worth it?

It’s sobering, raw and tragically comedic. And Signal’s very solid production, supported by a hauntingly good performance by Lonergan, captures it all and sticks with you.

If this review isn’t enough reason to see this show, here are three more: 1) tickets are FREE (but donations are greatly appreciated); 2) the space is air conditioned; 3) support Chicago theatre!