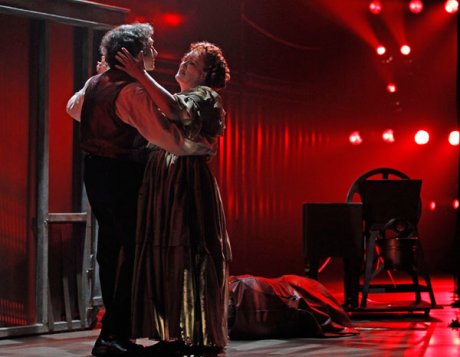 I’m on a mission to get my friends out to see a show at Drury Lane. Yes, the 45-minute drive out to the tacky-glam convention center is a bitch, but the trip is very much well worth it for those who appreciate grandly produced (and affordable) musical theatre.

Take for example their current production of Stephen Sondheim and Hugh Wheeler’s Sweeney Todd. Not only is the cast, from leads to ensemble, filled with some of Chicago’s (and Broadway’s) finest talents, but the scenic, lighting and costume designs fill the stage with arresting and disturbing visual pictures that stick with you. This is Sweeney Todd: full bodied.

Now, one might groan when seeing the “orchestra” listing only nine players. However, Carey Deadman has rearranged Jonathon Tunick’s original orchestrations for this production to keep the sound rich and full by filling any gaps with deep, booming pipe organ chords. And the vocal work by the rockstar ensemble is tight, thanks to Roberta Duchak’s exemplary music direction.

In short, Sondheim’s score slices to the gut here.

I’ve seen some Sweeneys, and this is probably one of the finest productions I’ve seen — with one significant reservation.

Broadway actor Gregg Edelman is one understated Sweeney, and while I appreciated his counter-intuitive take, I prefer my demon barbers a bit more, well, demonic. And some of his choices just didn’t work for me, as valid as they might have seemed in the rehearsal room. For example, after a rather reserved “Epiphany,” the penultimate first act closing number where Sweeney solidifies his bloody purpose, Edelman’s Sweeney glowed with joy. I mean, I get it: he’s “alive at last and full of joy,” right? But, I just didn’t get the sense that this man was ever a threat as he sat there beaming with pride with a twinkle in his eye.

But his performance doesn’t derail the entire piece. Thankfully, Edelman has the remarkable Liz McCartney carrying their scenes with her warm, weary and wry Mrs. Lovett. The woman was born to play this part. With a better Sweeney by her side, her performance, and this production, could cut deep and leave marks.

And then there’s the other star of any production of Sweeney Todd: the barber chair. Scenic designer Kevin Depinet has developed a trick chair that literally made me gasp when first used. The speed and force with which the actors fall into the pit below (where Mrs. Lovett transforms them into her infamous meat pies) is, simply, shocking. Those actors who play Sweeney’s victims at each performance are brave souls.

Finally, one question for director Rachel Rockwell: where’s the stage blood? You can use lighting and projections to your heart’s content, but I want a good gushing neck wound when watching a musical about a killer barber. Thanks!