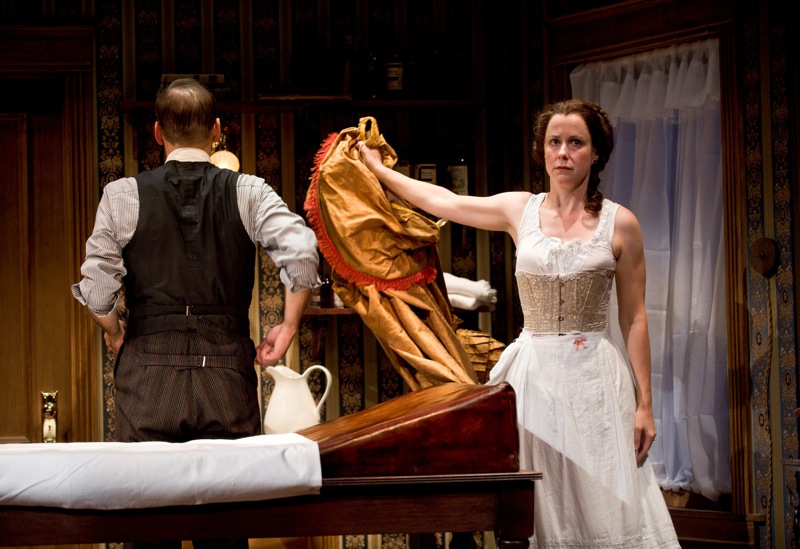 One simple moment in Sarah Ruhl’s In The Next Room or the vibrator play particularly struck me. It’s a scene where Catherine Givings (the outstanding Kate Fry), in preparation for a procedure by her stoically scientific husband (Mark Montgomery), removes her layers of petticoats, ribbons and swags. As she methodically hands off the pieces to her back-turned husband, Dr. Givings’ bewilderment grows (his expression when she hands him her bustle is priceless), and you realize this is most likely the first time Givings has witnessed his wife undress — the first time he’s examined the layers that support his wife’s external armor, as it were.

While Ruhl’s play — which has the rare combination of being as equally entertaining as it is thought-provoking — has many provocative things to say about impact of electricity on society (the play’s set in the 1880s when electricity was rapidly moving from novelty to reality), sexual awakening and the complex emotional ties to motherhood and breast feeding, it was this evolving relationship between an emotionally rigid husband and his desperate young wife that pulled me in. Without giving too much away, Dr. Givings is challenged to suppress his scientific detachment and begin to explore the vibrant woman who exists beneath the layers.

Catherine, an inquisitive and spirited woman, has a deep down urge, but can’t articulate it. She roams around the living room, aimless and fidgety, as her husband administers electrotherapy treatments behind closed doors to women (well, mostly women) who suffer from “hysteria” — a common practice for the time, and one in which the aptly-named Dr. Givings performs with utmost professionalism. Her indifference to her husband’s “research” soon turns into curiosity when she hears cries of ecstasy erupting from the next room. Before long, Catherine, along with Dr. Giving’s most recent patient, Mrs. Daldry (the pitch-perfect Polly Noonan), use a hat pin to break into the room and discover just how easy it is to press a button for immediate relief — even if they’re mystified why or how it works, or that the same sensation can be achieved in the bedroom with their husbands. Soon, the cunning Catherine takes matters into her own hands, literally and figuratively.

Meanwhile, there’s another story occurring in the main living quarters (Jack Magaw’s exquisitely detailed set highlights the suffocating divide between the play’s two worlds) involving Catherine and her struggles nursing her newborn. Her milk has dried up prematurely, and she’s no other choice but to hire a wet nurse — a concept that deeply disturbs her for many reasons: it suggests her inadequacies as a mother, there’s the risk the baby will bond with the wet nurse and vice versa, and it means the woman she hires will most likely have recently lost a child of her own. Yet, her pragmatic-to-a-fault husband tells her it’s a necessity for the well-being of their child. They hire Elizabeth (Tamberal Perry), an African American woman who, much to Catherine’s fears, recently lost a child of her own. A scene where the grieving mother nurses this strange child in front of the emotionally distraught Catherine has so many emotional layers, it could be a play unto itself.

Excellent acting, a clever and compelling script, and a lavish physical design (Jacqueline Firkin’s period dresses, and their complex sets of underthings, are a marvel) make this show a must-see. And I dare you not to be drawn into Kate Fry’s performance — it’s touching, funny and completely human.