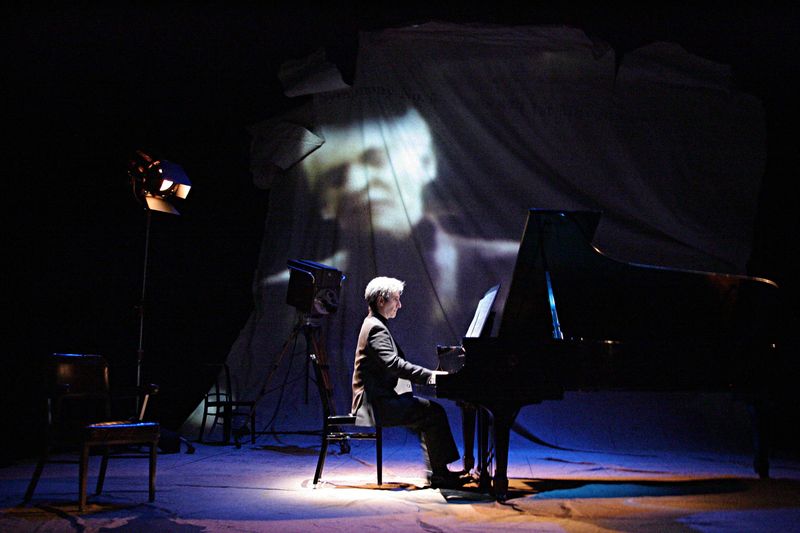 Hershey Felder is a talented man. He can play piano virtuosically (that’s a word, right?). He can command a stage. He knows how to establish a mood through carefully modulated delivery of words and music. He can sing (though, at times the sound isn’t what one would describe as pleasing). He can even do accents! The full audience at last night’s opening of his new one man show seemed to hang on to every carefully articulated syllable and grandly struck piano chord and gave an enthusiastic standing ovation for his efforts.

The man knows how to give a performance. For sure. (After all, he’s had ample experience creating and performing these types of shows, what with George Gershwin Alone, Monsieur Chopin and Beethoven, As I Knew Him in his repertoire.)

Shows of this sort can become a bit overindulgent, but I can look past that if the talent is there and the material’s solid. The talent? No question. The material and the execution of it?

Frankly, Maestro: The Art of Leonard Bernstein just isn’t that great of a play.

Admittedly, I knew very little about Bernstein’s life going in, though I am familiar with his more well known works, such as his scores to West Side Story (of course), Candide (of course), and a few more obscure pieces I played in orchestra and band in my previous life as a French Horn player (including my favorite Bernstein overture next to “Overture to Candide,” “Slava!“). Through Felder, I learned how Bernstein became respected as a composer after first being recognized for his prodigal conducting skills. I learned of Bernstein’s mentors (such as Aaron Copland, to name drop) and of the key events that led to his auspicious debut as the New York Philharmonic Orchestra’s conductor — a position that propelled him to become a household name.

Some of the more interesting moments occur when Felder would let us into the hidden secrets to Bernstein’s compositions — the derivation of his tunes from Jewish, folk and classical sources — by demonstrating on the gorgeous grand piano, which appropriately dominates the sparse stage (designed by Andrew Wilder).

It’s a dutiful, explanatory and information-packed evening — not unlike a staged Wikipedia article with some supportive sound clips (expertly played by Felder) slipped in.

The other problem, as is often the case with these kinds of solo shows, is we’re being told about the artist’s pain, exhilarations, fears, doubts and triumphs as a memory recollection, rather than seeing them played out before us. Which can be fine if there’s some sort of emotive heft occurring in the recollection. However, Felder as Bernstein comes off mechanical and distant, giving us insights into the man’s brilliant technical mind, but never really letting us into his heart. The final moments of Bernstein’s life, which could have been the most introspective and emotionally gripping parts of the evening, are raced through and then shrugged off, leading to an ubrupt and unsatisfying conclusion.