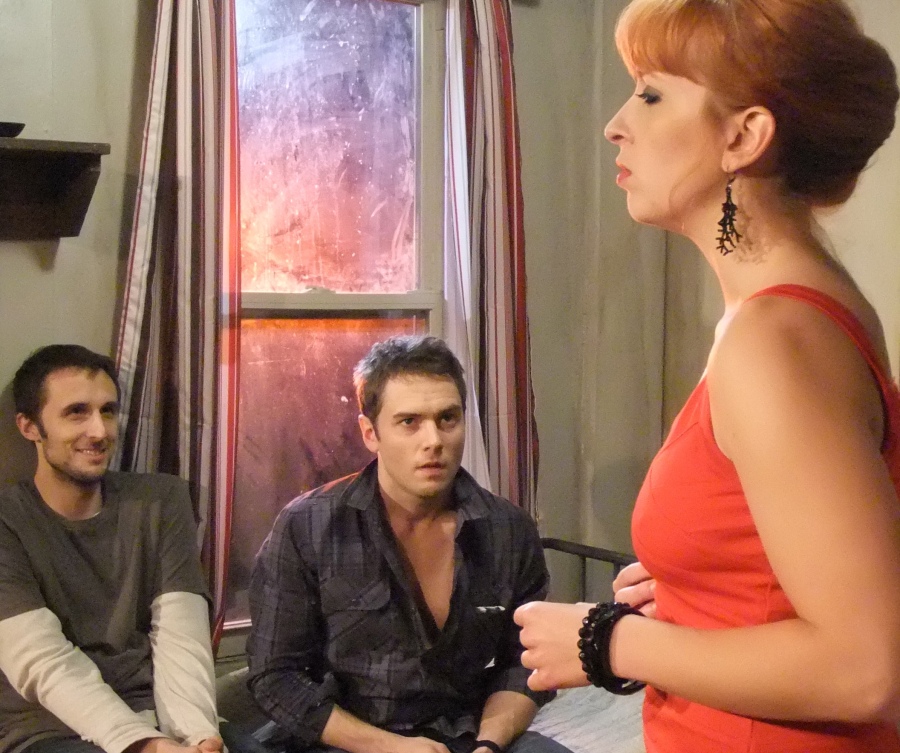 What happens in Amsterdam stays in Amsterdam. At least, that’s what should have been the case for Matt (Dan Behrendt), Davis (Dereck Garner) and a mysterious redhead named Christina (Sasha Gioppo). Matt, a sensitive and sad playwright, has been going through a rough patch. He broke up with his girlfriend last year, his latest play has hit a creative dead end, and he hasn’t slept in weeks. To help perk his buddy up, Davis brings Cassandra, whom he “met” in the infamous red light district, back to their hostel room. She seems a sweet girl who speaks charmingly broken English in a perfectly charming French accent.

Without giving too much away, Cassandra isn’t who she seems.

Matt sees through the facade right away, and is completely smitten by her. Davis, who’s a total douche but we sorta like him anyway because he genuinely seems to care about his sad friend in his own douchey way, leaves the two of them to bond.

In the second act, things get interesting when Matt gets a knock on his door to find the one night stand has unexpectedly reemerged. Matt, who’s been obsessing about the redhead in Amsterdam for the past year, confesses his love to her. But something’s changed. It’s sad and uncomfortable to watch. But even more tragic is what occurs when sad, lost people come together out of desperation. It’s like grocery shopping when you haven’t eaten in days. You wind up with a bag of Oreos and three boxes of Skinny Cow ice cream sandwiches. In other words: poor choices lead to deep guilt and sorrowful regret.

Adam Rapp’s play is a fascinating and tragic look at unrequited love. At times Rapp gets a little trite with his numerous literature references whenever Matt and Davis engage in pretentious writer-based arguments. And the last 20 minutes of the play seem a little too contrived in an attempt to tie things up in a perfectly tragic bow. However, on the whole, the play is quite solid and Mary-Arrchie’s production, directed by Carlo Lorenzo Garcia, offers clear, perfectly pitched performances from all three leads. Scott Davis’ deceptively simple set design effectively drives home the suffocating realities of the people in the play.

Finally, a warning: there’s a reason only 18 and older are permitted in the audience. There are some very graphic sex scenes with — gasp! — nudity. But both scenes are essential to the story. Bravo to this brave cast for carrying out the demands of the play without compromise.