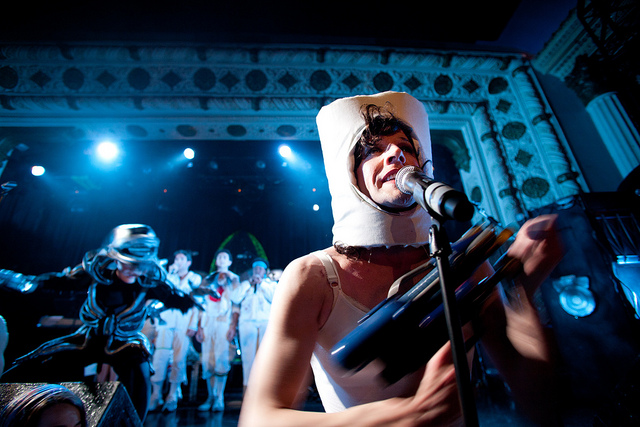 I’ve written enough about Alien Queen that you should know what it’s about by now, right? That it’s a rock concert performance piece that combines the iconic Alien movies with the fabulous music of Queen? If not, read my interview with the show’s creator, Scott Bradley, and this preview piece.

Now that that’s out of the way…

I finally checked the thing out this Saturday with my friend Sarah. It was my first visit to Metro, so that was exciting — it’s a cool space. A mixed crowd — young/old, male/female — quickly filled the venue when doors opened at 9pm. I’d also venture to say the crowd consisted of a healthy and highly unique ratio of gay camp fans to straight sci-fi geeks.

Before the main event, we experienced Battlestar Fantastica — a “terrifyingly sexy sci-fi variety hour.” It’s about what you’d expect. Drag queens, silver body paint, burlesque humanoids, and the like. Some acts were fun and brief, some outright ridiculous, and some just went on and on and on. Lots of men in heels, too, which is always fun to see, but not really what I’d consider sci-fi. Comedian Cameron Esposito had to bow out at the last minute as the variety hour’s MC due to illness, and a crackerjack troupe of variety hour performers filled in nicely, keeping the first half clipping along.

Then, at around 11:30 pm, the show starts. And from the first explosive downbeat, it’s clear that you’re actually getting a rock solid rock concert — these skilled musicians do the ’70s band proud. The moment Ryan Lanning enters the stage in wife beater, white panties, ’70s knee socks, and brown curly wig that manages to harken Sigourney Weaver’s weave as well as Queen frontman Freddie Mercury’s iconic ‘do, you know this show “gets” it.

From there, it’s a wit-filled, wild, hypercreative celebration of the first two Alien films told through music, dance, out-of-this-world costumes and — wait for it — puppets.

As the audience cheered on some of the more outlandish bits moments before they occurred, I got the sense many of the audience members were return attendees (this is the show’s fifth Metro gig, with a handful of prior productions at Circuit nightclub over the years). “We Will Rock You,” “Another One Bites the Dust,” “We Are the Champions” — all the hits are there, and presented in perfect context for the alien vs. human plotline.

If you haven’t experienced Alien Queen yet, I suggest you do. You won’t regret it. In fact, you might even become a cult fan. Check out the show’s website for info on when this Queen will hatch again.