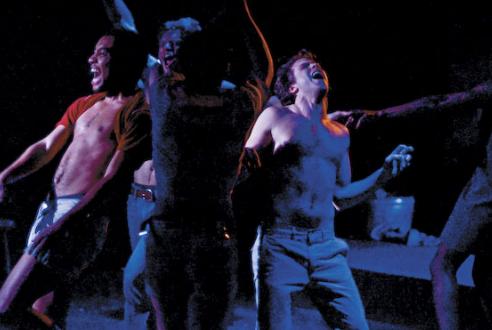 Hit the Wall, a powerful new play about the Stonewall Uprising produced by the relatively newbie theater company The Inconvenience, is one of those shows everyone in Chicago is talking about. Written by Inconvenience company member Ike Holter and directed by Eric Hoff, the play premiered at Steppenwolf Theatre’s Garage Rep Series in February and started gaining buzz following its stellar reviews. Then, the likes of Rosie O’Donnell and Mayor Rahm Emanuel showed up in the 100 seat space to see it. And then the production got extended — twice. So, I feel so lucky to have finally caught this show before its run ended in just a few short weeks. Read more on The Huffington Post >

One thought on “HuffPost Review: ‘Hit the Wall’ Throws Emotional Punches as It Breaks Down Barriers for Gay Rights”