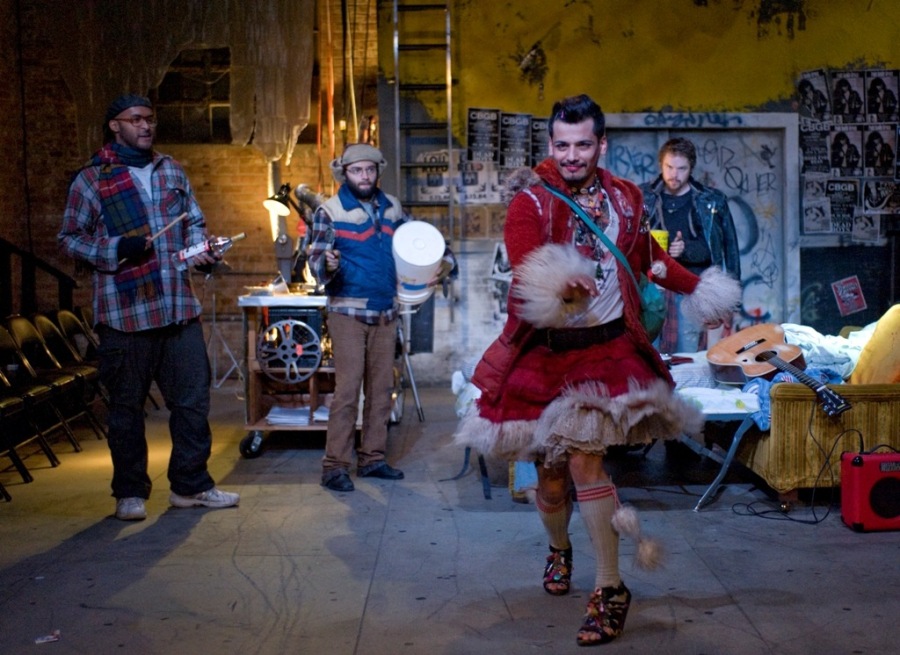 It’s a Jonathan Larson summer in Chicago. Currently, the genre-defining musical theatre composer is receiving productions of his two major shows by a trio of distinguished local theatre companies.

Tick, Tick… Boom!, which is essentially the precursor to Rent, is a largely autobiographical musical about the late composer’s artistic struggles as he begins to ease into his rock-meets-musical-theatre sound. Porchlight Music Theatre’s superbly pitched production captures Larson’s artistic valley just before he entered the highest peak of his tragically short career (Larson died of a rare, misdiagnosed heart disorder in 1996 just before Rent’s first major production Off-Broadway).

As “Jon” (the Larson stand-in), we have the immensely talented Adrian Aguilar who holds this fragmented show together with charisma, humanity and killer vocals. As his best friend and former fellow artist, Bear Bellinger (what a name!) melts our hearts with his earnestness and golden voice. And Jenny Guse is tasked with playing the various female roles, including Jon’s mis-matched love interest.

Director Adam Pelty keeps things simple, but also has done the smart thing by partnering with Anna Henson and Rasean Davonte Johnson to develop a series of eye-popping projections that powerfully punctuate the story. Together, this team drives home the tragedy of losing a talent at his prime through a simple yet powerful framing device. Stunning stuff.

Boom and Rent carry many similar themes, chief among them the struggle to find one’s way without compromising one’s internal ambition. So, it makes total sense to see Rent following Boom. Unfortunately, About Face Theatre and American Theater Company’s co-production is lacking in some core ways. Read the rest of this review at The Huffington Post >