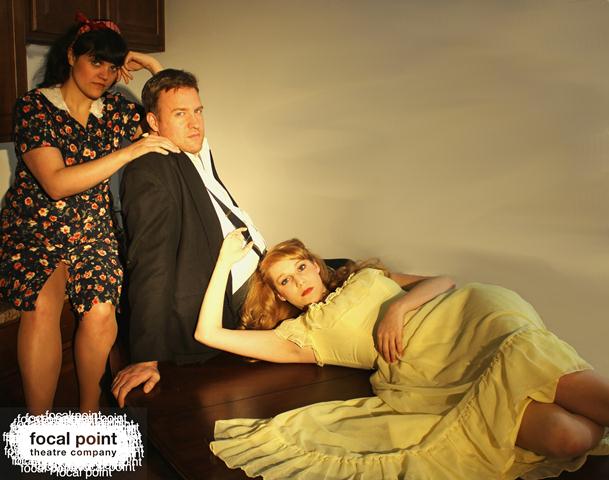 It’s been said that English plays are all about class, while American plays are about property. Well, that’s certainly the case in Patrick Marber’s 1995 play After Miss Julie, which takes August Strindberg’s late 19th century play, Miss Julie, and pulls into 1945 England — specifically the evening when the British Labour Party defeated the conservative incumbents.

In Marber’s retelling, two servants — a chauffeur John (Robert Tobin) and a cook Christine (Morgan Manasa) — are winding down in the kitchen after a particularly busy day catering to their highly demanding masters — a wealthy political family — and preparing for that evening’s festivities. The family’s petulant daughter, Miss Julie (Mary-Kate Arnold), stumbles in and demands that John accompanies her to the celebration. Despite John being engaged to (engage) Christine, he acquiesces, and soon discovers that Miss Julie expects and demands more than a dance partner. After all, a servant knows their place.

Marber’s explosive and darkly satiric 70-minute play, which is receiving its Chicago premiere by the brand-new Focal Point Theatre Company, explores the power-shift between classes and the degree one will go in sacrificing one’s dignity to adhere to archaic social constructs. Things start slow, but soon boil over into chaos and disorientation as John begins to confront Miss Julie about her fascination with him.

Who controls whom? Marber’s insanely tricky play demands artists who can navigate the numerous and seemingly random shifts in power perspective. I mean, one minute John is one thrust away from raping Miss Julie on the kitchen table, and the next Miss Julie is demanding John kisses her shoes — and he does. Tobin and Arnold, under Melissa Albertario’s direction, hit the high emotional notes with theatrical fireworks and fearlessness, but haven’t yet fully connected the dots between power-shifts. There comes a point when you’re not sure how much further they can take it before the evening dissolves into farce. Luckily, Manasa’s carefully underplayed effort grounds the evening and reminds us of the power of knowing when to make an exit.

Still, this is a bold and respectful effort by Focal Point Theatre Company, and I very much look forward to seeing what this new group has in store.

One thought on “When class lines collide: Focal Point’s potent ‘After Miss Julie’ packs a punch”