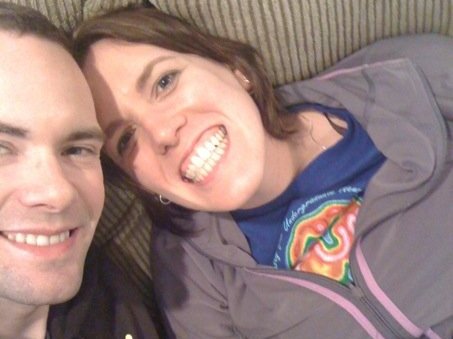 Let’s cut to the chase: My sister ended her brave and brief 1.5 year battle with colon cancer last week. Her passing was shockingly sudden. I mean, we saw it coming, as she had stage IV of a very rare and aggressive form of colon cancer, but we — including my sister — weren’t prepared for the inevitable. Not this soon. I mean, who is? A mere three weeks ago she had received some difficult news about her chemo no longer being effective and they were going to stop treatment, and two weeks ago she was able bodied.

Then, that Friday the bottom fell out.

Her breathing got bad, and then got dramatically worse. She went into Hospice on Monday, was shipped to inpatient Hospice on Tuesday, and by Wednesday she was gone. And, thanks to my mother who rallied the troops Tuesday evening, we were there with her, surrounding her with love, when she passed. My sister’s husband Brad, my mother and father, my partner and husband-to-be Gerald, and Heather’s best friend Jamie and her husband Josh — we were in the inpatient Hospice room on that freakishly beautiful summer day as she turned grey in front of us. Totally surreal. Totally unfair. And totally shitty.

But we are celebrating her life. Heather never wanted to be a bother or burden to anyone — not even post-life, so she didn’t have many requests. But she clearly stated she wanted us to move on, to keep her memory alive, and not to let these events weigh us down.

So, we attempted to honor that request by throwing a celebration of life event for her this weekend at NKU, where she was a highly respected chemistry professor (you can read her obit, which I reluctantly wrote, here). And it was a huge success — more than 500 attendees from all over the country came in to honor her memory. There was food, drinks and a hand-selected music track. There was also much laughter, a lot of it through tears. We held four toasts in her honor, kicked off by me (wearing the same outfit I wore to work on Tuesday when I got the call from my mother that I needed to get to Kentucky, and get there NOW). NKU’s president even changed his travel plans to make an appearance and say a few impromptu, but inspired, words.

But perhaps the most meaningful toast was the final one, delivered with great poise and grace by Heather’s first graduate student, Heather Gulley-Stahl. Watch it here:

Heather, or Dr. Bullen as many yesterday called her, would be so fucking proud.

Brad, Heather’s husband, requested those who knew Heather to write some stories about her so their adorable 20-month old son, Vonn, would know who his mother was. Perhaps I’m being overly sentimental at this moment, but I’m going to share this letter here. I want the world, or at least those who make the effort to read this blog, to know what my big sister meant to me.

I’m sure you’ve gathered that Heather was an amazing woman. These traits were part of her genetic makeup. From my first memory of her, she was driven, focused and selfless.

Ok, so she could be a total b at times (and even she’d admit this), but that’s because in many ways we were total opposites. She rabidly cheered on every sport known to man, and I loved theatre and art. She was into science fiction and movies with explosions, and I like pretentious crap like “Melancholia” and “The Hours.” She managed her finances with an eagle eye, always looking for the best deal in her purchases, where my money management involves logging into my bank account and being depressed. She was a scientist, and I a writer.

Despite these differences, we were eerily similar in many subtle ways. We worried about others’ well-being and managed anxiety in the same way (poorly). We nit-picked our significant others with the same passive-agressive relentlessness (I kid, but not really). We sat in the same odd, uncomfortable-looking position when watching TV and laughed about it when people looked at us with wonder. We were both expert procrastinators who worked best under pressure. And we both had great respect and admiration for each other’s wildly different skills and successes.

To me she was a marvel. I hope she knew this. But, she disliked glowing attention and vocal accolades, so even if I did tell her this, she’d wave it off with a “oh whatever” hand gesture accompanied by an embarrassed smirk.

I digress. The goal of this book is to share stories. Oh, there are many great stories of Heather, but some of my most favorites are the short, simple memories.

I remember as kids cocooned up in sleeping bags in Grandma B’s and Grandpa Bob’s house in Mason, Michigan (in what we called the sunroom) trying to sleep. We played this game where I asked Heather how things worked, and she’d confidently give me well-reasoned answers about the mysteries of life. From her I learned how record players worked (something to do with magnetic fields) where boogers come from (when you eat them, they go back in your nose instantly) and how electricity works (again, something to do with magnetic fields and lightening). She also explained to me, in her practical and analytical way, about the birds and the bees — an area where she was remarkably accurate.

I also vividly remember the time I got really mad about something and packed up my backpack with every intention of running away. Keep in mind, I was probably no more than 8, so my bag included all the essentials for a kid planning to go it alone for an unforeseen amount of time: a random assortment of Legos, a few Disney cassette tapes and Rock Star Ken (he was dreamy). Red faced and bleary eyed, I wasn’t more than a few blocks into the neighboring subdivision when your mother rode up next to me on her bike and said, “Hey, retard. Dinner’s ready.” And I turned around and came home. She just got me.

There was also the time dad was in charge of Heather and me while mom was at work, and he asked us what we wanted for lunch. Heather was totally fine with Mac ‘n’ Cheese, much to dad’s delight, and I, for whatever reason, wanted fish. I *demanded* fish. And I threw a huge, bratty fit about it. So, Heather and dad worked it out — they were going to make me fish, while they dined on Mac ‘n’ Cheese. Great. They called me down from the bedroom, where I’d holed myself up, and brought me to a little table they’d arranged. On the table was a napkin covering a plate. I sat down, eager to dig into my fish dinner, and they pulled off the napkin to reveal a cartoon paper fish Heather had created, complete with scales, fins and big X’s for eyes. I was so, so mad. And Heather and dad laughed and laughed and laughed — as they should have. Man, I was a brat.

Through high school, I tried to follow in her impressive footsteps by taking advanced chemistry and calculus. While I got good grades, I was a poor student as I never really understood what I was doing (I memorized a lot of stuff for tests rather then attempted to learn the reasoning behind it) and, more importantly, I simply wasn’t passionate about it. I eventually came to terms that my path would be different than Heather’s, but I didn’t know what that would look like. Her’s was the only path I knew, so I tried to model it, with disappointing results. Sensing my confusion, your mother, through her innate mentoring abilities, helped me define my focus by working with me to identify my undergrad major — speech communication. And she was right on the money.

Speaking of college, Heather’s legacy helped me with that major transition. You see, your mother had just graduated from Albion when I started there, and, as a result, I befriended many of her friends, most of them KD sisters whom I’d met during my previous campus visits when Heather was in her junior and senior years. And, lucky for me, she had a knack for picking out good friends. They took me — a shy, awkward introvert — under their wing and introduced me to other life-long friends. I don’t know how I would have survived undergrad without that stepping stone.

Heather was also great in a crisis. She got shit done. And we went to each other for family advice. She told me she was pregnant with you before she told our parents because she wanted my thoughts, being the communication guy, on how she should break it to them. She was the first person I came out to in the immediate family (during a particularly sloppy Albion frat party) because I couldn’t bear the thought of keeping the secret from her any longer. And of course she pretty much already knew. She respected my decision to tell my parents when I was ready, but made it clear that they would love me regardless. And, again, she was right on the money.

Heather loved you so, so much, Vonn. She confided in me about how she feared you’d only know her as a sick mother. True, she had this shitty disease from day 1 of your life through the end of hers, but she was fully active and invested up until her final week. She already knew you were going to go far because you demonstrated great curiosity, even by your first year, which I’ve no doubt is a result of her scientific brain makeup. Plus, you cheered on the Spartan team more than once while watching them on TV, showing that you have more than a touch of her awesomeness.

16 thoughts on “In honor of my late sister, Dr. Heather Bullen, or the blog post I was hoping I’d never have to write”