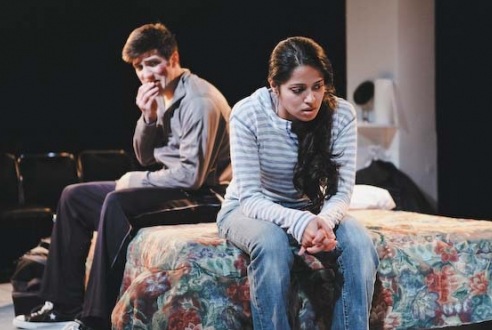 I remember in elementary school I, along with some daredevil girls, perfected the art of the “penny drop.” This involved hanging by your knees upside-down on the monkey bars, swinging and gaining enough momentum to jump off and land right-side up. Each recess, we’d dare each other to take the trick even further by adding in more rotations before landing, hanging by one leg, and so on. (I’m not sure where the recess aids were during all this, but this was the mid-’80s. Now, kids just get pregnant and make meth on the playground.)

And then one fall day, I flipped a half turn too many and landed on my hand, swiftly snapping my wrist.

As kids, we were fearless. Injury was part of growing up and essential to learning caution and care. But for unlikely friends Doug and Kayleen, pain is as essential as air.

Where Doug (Tim Martin) burns out his eye with a firework, willingly rides his bike off the school roof and manages to get struck by lightning, Kayleen’s (Mouzam Makkar) scars are more emotionally derived. She’s a cutter, a manifestation of her emotionally abusive upbringing.

When these two souls connect at a middle school dance, a non-conventional bond is formed that lasts three decades. And in Rajiv Joseph’s 2009 play, Gruesome Playground Injuries, he tracks these two lives in a non-linear fashion as they reconnect during milestone injuries in ill-fated attempts to heal one another.

In Rasaka Theatre Company’s appropriately bare-bones production directed by Lavina Jadhwani, Joseph’s macabre and peculiar vignettes are well presented, helping uncover the quirky necessity of this dysfunctional relationship. That is, until the action nearly comes to a halt several times during distractingly complex on-stage costume changes. Martin and Makkar play well off each other, but seem a bit too in control for characters whose survival requires living outside convention.