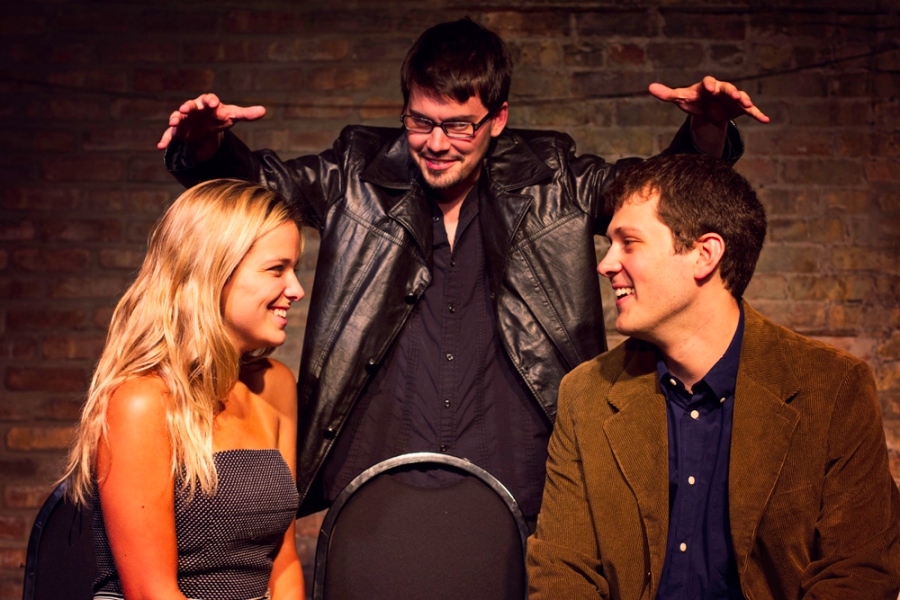 Scene from “Once Upon A Rom Com: The Bill Pullman Story.”

Ok. I’m going to attempt a new weekly series that rounds up the things I get in my box that I think sound cool, interesting, fascinating, freakish, what have you, that I most likely won’t have time to see myself. Because I get so many invites at any given day (particularly this month, which is the unofficial start of the Chicago theatre season), I’m attempting to pare it down to three or four items a week. So, if you choose to check out any of the items in this list, proceed at your own risk, and all that.

Once Upon A Rom Com: The Bill Pullman Story. What caught me is the title. I also enjoyed that the show’s creator, when pitching me the story, assured me that it’s NOT a burlesque show, which was nice to know given that it’s performed at Gorilla Tango, which as many Chicago theatre people know, loves its wacky burlesque shows. Plus, I’ve always had a soft spot for Jeff Daniels Bill Pullman.

After making a career out of playing the “other guy” in numerous nineties romantic comedies, American actor extraordinaire Bill Pullman has sunk into a deep depression, believing he will never find true love. It will take the help of a fairy godfather in the form of the one and only Jeff Goldblum to pull him back together and save the girl of his dreams from a devious and wicked French lover. This is a real man’s fairy tale for the hopeless romantic in all of us! ONCE UPON A ROM COM: THE BILL PULLMAN STORY performs Wednesdays at 7:30pm, September 5 ñ October 31, 2012 at Gorilla Tango Theatre (1919 N. Milwaukee Avenue, Chicago IL 60647). Tickets are $15; to purchase tickets visit www.gorillatango.com or call 773-598-4549.

“The Interview Show,” featuring special guest David Cromer. Mark Bazer, host of “The Interview Show” let me know that this Friday, September 7, he’ll by joined by David Cromer, director of the Goodman Theatre’s Upcoming “Sweet Bird of Youth” by Tennessee Williams and Starring Diane Lane and Finn Wittrock. The show starts at 6:30 at The Hideout. More info here >

The Last Five Years by Another Production Company. This Jason Robert Brown musical about a pair of lovers whose paths cross in non-linear fashion, returns to Chicago in what promises to be an “innovative revival.” I know, it sounds complicated, but the show is actually beautiful and poignant and the music is to die. I’ve seen a few productions of this show over the years, and just don’t have time to fit this one in, sadly.

The Off-Broadway hit musical, The Last Five Years, book, lyrics and music by Jason Robert Brown, receives an innovative revival by Another Production Company at Stage 773. The story explores a five-year relationship between Jamie Wellerstein, a rising novelist, and Catherine Hyatt, a struggling actress. Jamie’s story is told in chronological order, starting just after the couple’s first date, and Cathy’s story is told in reverse chronological order, beginning the show at the end of the marriage.

The Last Five Years begins performances on Thursday September 6th, 2012 and continues through October 5th, 2012 at Stage 773, located at 1221 W. Belmont, Chicago, IL 60657 in the Lakeview Neighborhood. The musical runs Thursdays and Fridays at 8pm. Tickets are $25.00. Purchase tickets through Stage 773 Box Office at 773-327-5252 or Online: www.stage773.com. Discounts and special activities will be announced through Another Production Company’s Blog. Visit www.anothurproductionco.com for more information.