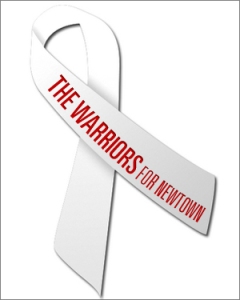 On March 24, 1998, when Mary Hollis Inboden was 12 years old, a boy pulled a fire alarm at her middle school, ran into the woods to meet his friend, and they both started shooting at the students and teachers as they filed outside on the playground. Ten people were injured, five were killed — one of whom was Inboden’s best friend. Her name was Paige.

In 2011, Inboden, now a working actress in Chicago (with a recurring role in the Starz series Boss) developed The Warriors, an ensemble-driven play about how this experience impacted her life and the importance of facing your past to make peace with your future. I was lucky enough to catch the show, produced by The New Colony, during its month-long run, and found great value in it.

In a brave and swift demonstration of support for the families of the horrific Newtown shootings, on January 6 at 7:30 p.m., Victory Gardens Theater will present a one-night-only staged reading of The Warriors to benefit the Sandy Hook School Victims Relief Fund. Tickets are $15.