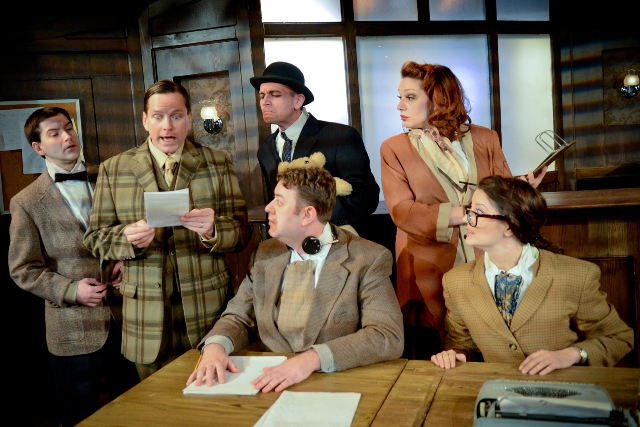 While the rest of Europe was suffering through WWII, Ireland stood fast in its neutrality, even referring to the war as “The Emergency” in an attempt to mitigate the impact of the war, and the news surrounding it, with their people.

Improbable Frequency, an unapologetically zany musical comedy by Arthur Riordan (book and lyrics) and Bell Helicopter (music), explores this historical footnote with dizzying wordplay and a highly improbable storyline involving a secret society of spies, a mad scientist and a barrage of wordy English music hall patter songs. Think of it as Monty Python meets Gilbert and Sulliven mixed with a huge dose of The 39 Steps.

We are introduced to Tristram Faraday (Mike Dailey), a savant-like British code breaker who unexpectedly (and somewhat reluctantly) finds himself enlisted by the British Intelligence to carry out a super-secret spy mission (is there any other?) in 1941 Dublin. Along his travels, he meets an Irish lady spy (a sweet Sarah Goeden) who might be on his trail for suspect reasons, and then something about a German physicist (Eric Paskey) who’s manipulated radio waves to alter time and Irish weather? Or something? I totally lost the plot by that point — and, frankly, didn’t care.

Truthfully, I have a pretty low tolerance for off-the-hook zany — if it’s not grounded by some human-scale, or at least, compelling, storyline — and at two hours and two acts, Riordan’s punny script and lyrics, which give off an “aren’t we so clever?” vibe, could use a trim-down. Strawdog’s production, directed by Kyle Hamman, tears into the lunacy with abandon, offering up mugging and running about from start to finish, practically demanding you pay attention. And, despite a game cast giving it their all (and looking like they’re having a ball doing so), it’s exhausting.

That said, some may go for this sort of thing. Lord knows the press night audience was laughing their britches off.