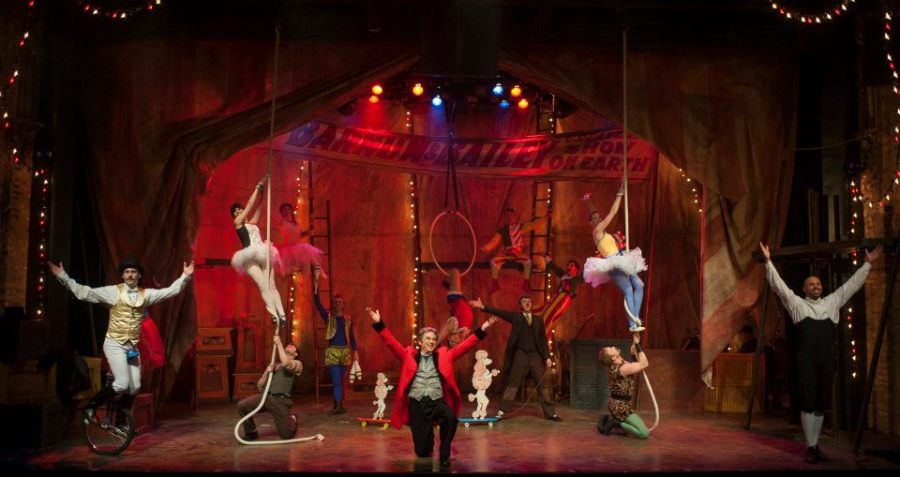 P.T. Barnum knew how to put on a show. With some manipulative marketing and a dash of spectacle, he could sell you a wooden nickel for a dollar.

The 1980 musical Barnum, which features a jovial, ear-wormy score by Cy Coleman, captured this celebrated flim-flam artist’s ascent to a household name as partner in the Barnum and Bailey Circus. And Mercury Theater Chicago presents an appealing, family friendly production through June 16.

In the title role, Chicago favorite Gene Weygandt offers a peppy and approachable Barnum. Surrounded by a small-yet-mighty ensemble of actor-singer-acrobats, the show hits all the right marks — though perhaps not as thrillingly as one might hope.

Granted, Barnum, a musical with circus elements, is one of the more challenging shows to produce. So I have to applaud Mercury, under artistic director L. Walter Stearns, for daring to take it on. And, for the most part, the show delivers. But a perpetual sense of hesitancy keeps the show from flying high without a net.

To start, Weygandt, while likeable, hasn’t yet found the command this role requires. He too often defaults to baffled observer when he should be orchestrating the action around him. In fact, everyone (aside from the warm and gloriously voiced Corey Goodrich as Barnum’s pragmatic wife Charity) seemed a bit tentative the night I saw it. And rightly so: actor/singers are required to execute physical stunts, and stunt makers are required to act and sing.

I’m sure following a few weeks of performances, the show will find its footing.

Eugene Dizon leads a small band that has some nice moments but desperately needs at least two more brass players (including a tuba — I nearly got up and left the theatre when a synthesizer started playing the opening of “Come Follow the Band.” What band? I just hear a Casio.)