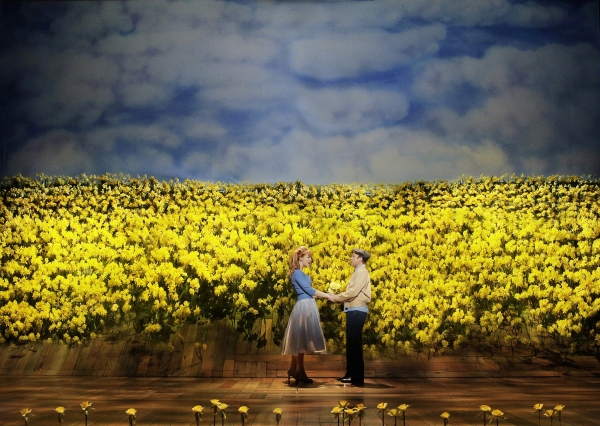 Who doesn’t enjoy a good story? It’s why we love the theatre. Through words, music, dance and imagination, theatre helps shape a shared moment. It transports us to another place and time — or helps us sort out our sobering reality. It’s magical.

The pre-Broadway musical Big Fish, based on the novel by Daniel Wallace and the 2003 movie of the same name, offers huge potential to explore the power of storytelling. Edward Bloom, played by the predictable but often excellent Norbert Leo Butz, is a small town man with big dreams. He’s the kind of guy who, in his quest to track down the love of his life (the radiant Kate Baldwin), he travels cross-country with the circus for three years, and is ultimately shot out of a cannon to request her hand in marriage.

Edward’s pragmatic son, Will (the excellent Bobby Steggert) has had enough. A hard-hitting journalist, he craves honesty and sincerity. “He’s a stranger I know well,” says Will when describing his father. Sick of being a footnote in his father’s tall tales, Will removes himself from the plot. But when Edward faces a grim diagnosis that threatens to cut short his destiny, Will returns with the goal of unlocking the mystery — to see if Edward’s stories are, in fact, a smoke screen concealing something dark within.

Directed and choreographed by Susan Stroman with a score by Andrew Lippa and book by John August, Big Fish has a long way before it finds the story it wants to tell. Is this a love story? A story about the innate need to pass on one’s legacy? A wacky, episodic journey? All of the above? Right now it’s not entirely clear.

The good news is the show ends so strongly, you almost forgive the shoddy first act. With tears in my eyes following a highly charged final moment, I knew the creators had huge potential for a unique and powerful new musical.

However, as Edward Bloom would no doubt attest to, a good story demands a compelling opener. And right now, Big Fish flounders its way in hooking into a narrative through-line, only finding its footing somewhere in act two.

That’s not to say the creators should throw this Fish back into the water. Excellent moments pepper the first act, including a beautiful number between Edward and Sandra when they first lock eyes, “Time Stops.” In fact, Lippa’s best contributions are the quiet, introspective moments. Despite all the spectacle (though I think the creative team could go much further with the fantastical elements), the most spine-chilling moment takes place when Baldwin sings a simple song to her dying husband, “I Don’t Need a Roof.” The reason it works? It’s excellent storytelling.

In short: Big Fish needs to find its story.

“Big Fish” plays through May 5 at the Oriental Theatre. More info here >