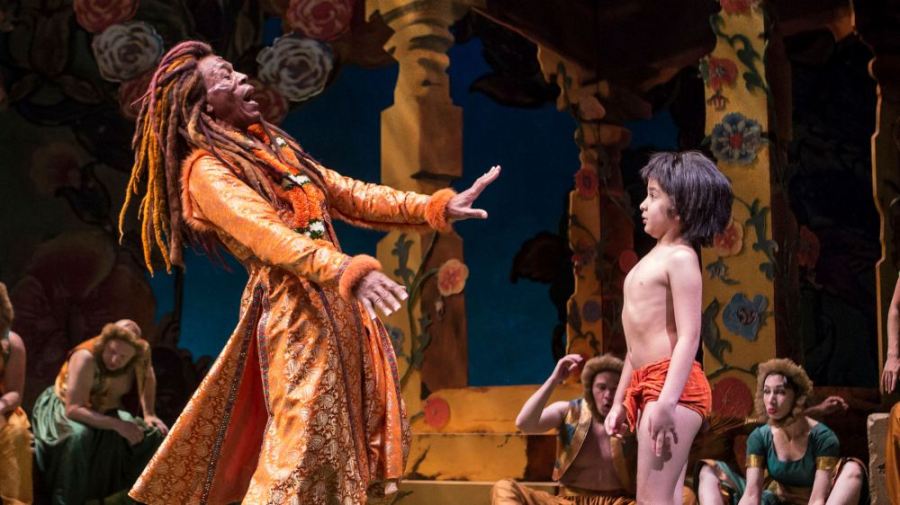 Walt Disney’s “The Jungle Book” is one of those movies I’m sure I’ve seen, but I don’t recall much from it – aside from the jaunty tune “The Bear Necessities.”

While the Goodman’s new and wildly inventive adaptation of Rudyard Kipling’s collection of stories is a wholly original creation by mastermind director Mary Zimmerman, it freely lifts tunes from the well-known 1967 animated film.

And smartly, Zimmerman has again collaborated with music director Doug Peck (whom she worked with, to great success, on Candide a few seasons ago). Never one to skirt a challenge, Peck has found a remarkable way to combine the jazzy, Dixieland sounds inherent in the Sherman brothers’ score with the story’s Indian roots. And the result is downright magical, with the pit musicians, done up in traditional Indian folk outfits, marching onstage playing anything from a sitar and tablas to trombone and saxophone.

But why am I focusing on the music in a show featuring such eye-popping costumes (by Mara Blumenfeld) and dizzying choreography (by Christopher Gattelli)?

To me, the sound of this show is what captured my imagination. It’s such an original sensation, it draws you into another world. It’s the heart and soul of this production.

True: the show is a sensation for the eyes and ears. But the one area it’s lacking, and shockingly so given the talent involved, is heart. Zimmerman’s script merrily bounces along as we follow the young Mowgli (played by the joyous Akash Chopra at my performance) from episode to episode. Characters, including the beloved Baloo (played with great charm by Kevin Carolan) and the overzealous King Louie (a show-stopping André De Shields) fade in and out of his life with little impact. The fiercely devoted Bagheera (Usman Ally) struggles with taking Mowgli back to the people pack, but really it seems more a setup for these two to meet all the eccentric jungle critters along the way.

Following a particularly uneventful confrontation with Shere Khan (the perfectly cast and woefully underutilized Larry Yando), Mowgli’s safely back home. We enjoyed — and at times, marveled at — the journey, but what have we learned?

I will say: audiences seem to love this show. Not since their annual production of A Christmas Carol have I seen so many young theatregoers at the Goodman, which is fabulous.

“The Jungle Book” plays through August 18 at The Goodman Theatre. More info here >

4 thoughts on “‘The Jungle Book’ is a feast for the eyes and ears, but leaves the heart empty”