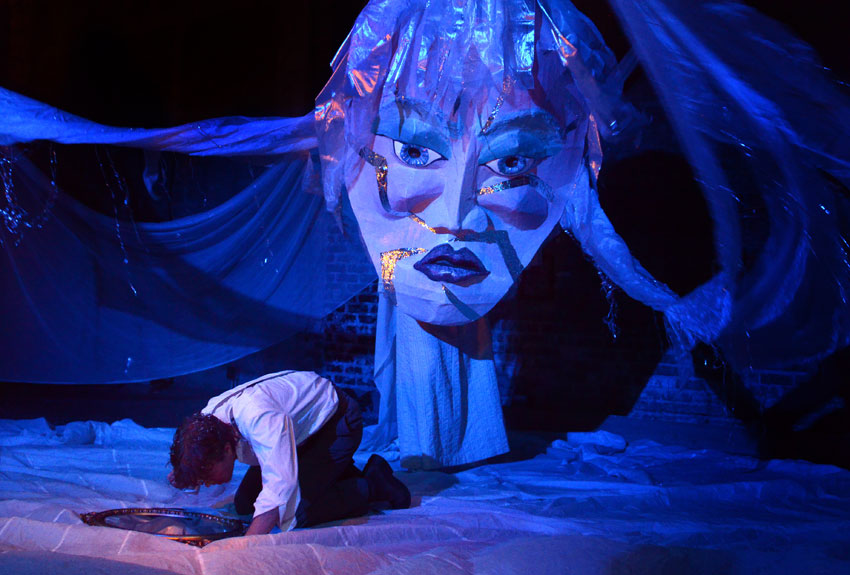 I grew up in northern Michigan, so I have a healthy affinity for that white flakey stuff. Not so much the polar vortex, but when it’s hovering above 15 degrees, I’m good.

So, in combining my love of snow and theatre, over the past three days I checked out two highly inventive productions that both explore winter and the problems it creates — especially if you’re a summer soul trapped in a winter town.

The House Theatre of Chicago’s remounting of their critically acclaimed Rose and the Rime takes us into the world of Radio Falls, a small town cast under the chilling spell of a perpetual winter by an allusive snow witch. Young Rose (the spritely Paige Collins) makes the most of it by sledding about and gulping down hot chocolate. Her tense but well-meaning Uncle Roger (Michael E. Smith) has raised Rose ever since her parents met their fate when the town was cursed. Rose, in all her naivety and fearlessness, goes on a quest to save her town and get a gold coin that will cure all.

Following a series of circumstances involving wolves and winter storms, she succeeds, but the result isn’t what anyone anticipated — except for Uncle Roger, who sees history repeating itself. But by then, perhaps it’s too late?

I admire House Theatre’s commitment to the art of storytelling — especially in telling tales that explore the dark side of happily ever after. You feel like you’re part of something communal — almost spiritual. However, this production didn’t awake my senses or capture my imagination — rather it simply made me exhausted. Perhaps I could blame it on a weary Thursday afternoon, where the last thing I wanted was actors running around yelling their lines like they’d just had 10 cups of caffeinated hot chocolate.

Hyperactivity is not a substitute for heart.

But it was more than that. Director Nathan Allan (who also wrote the piece along with collaborators Chris Matthews and Jake Minton) has the actors constantly speaking over top of each other and racing through scenes, which muddied up the storytelling for me. This proved particularly problematic during the latter third of this 85-minute one-act, where a love story emerges out of seemingly nowhere and the tone of the story dramatically shifts without warning — and, more importantly, without having been emotionally earned.

In other words, it felt contrived — something I’d never expect from House.

I, apparently, got lost in the flurry of snow (which there’s a lot, and it’s indeed impressive), flying rigs and yelling, and just waited for the thing to blow over.

Filament Theatre’s The Snow Queen marks a series of new beginnings for this resourceful company. This utterly captivating production launches the debut of their new space in the eclectic Portage Park neighborhood (an area I’ve recently called home), and it introduces us to their new acting company. And from the looks of it, this group (which produced one of my favorite Chicago productions back in 2011) has set the foundation for a very promising future.

Yes, the space is still in development (though I find the unfinished, industrial look charming and refreshing), and the ensemble still needs some time to gel, but the play’s the thing, and this production strikes the right mix of earnestness, joy and sincerity with a just a touch of theatrical magic.

Much like Rose and the Rime, The Snow Queen follows a young couple who have been trapped in a winter wonderland by a queen (who’s essentially a witch with a crown). The boy (Christian Libonati) has been held captive by the Snow Queen (Lindsey Dorcus), while the girl (Mara Dale) follows her heart to save her best friend. Along the way, she meets a host of characters, including a band of trolls, a talking reindeer and a helpful raven.

As this is a Hans Christian Andersen adaptation, the story ends on a hopeful, heartwarming note with a clear moral lesson.

Under Allega Libonati’s resourceful and grounded direction, this production fully engaged my inner kid. Thoughtful use of puppets and masks (designed by master mask maker Jeff Semmerling, whose studio is just a few floors above Filament’s new space) add a dash of whimsy without sacrificing story. And at 60 minutes running time, the young audience’s attention span never wavered.

If I have to sum up the main difference between these two productions, it comes down to the core ingredient driving these two stories: snow. In The Snow Queen, the audience is invited to throw makeshift snow at the stage, whereas in Rose and the Rime, the snow is thrust upon us in hyperventilating waves. Sometimes a simple snowstorm is all that’s needed to warm the heart.


“Rose and the Rime” plays through March 9. More info here >

2 thoughts on “A tale of two snow witches: House Theatre’s ‘Rose and the Rime’ and Filament’s ‘The Snow Queen’”