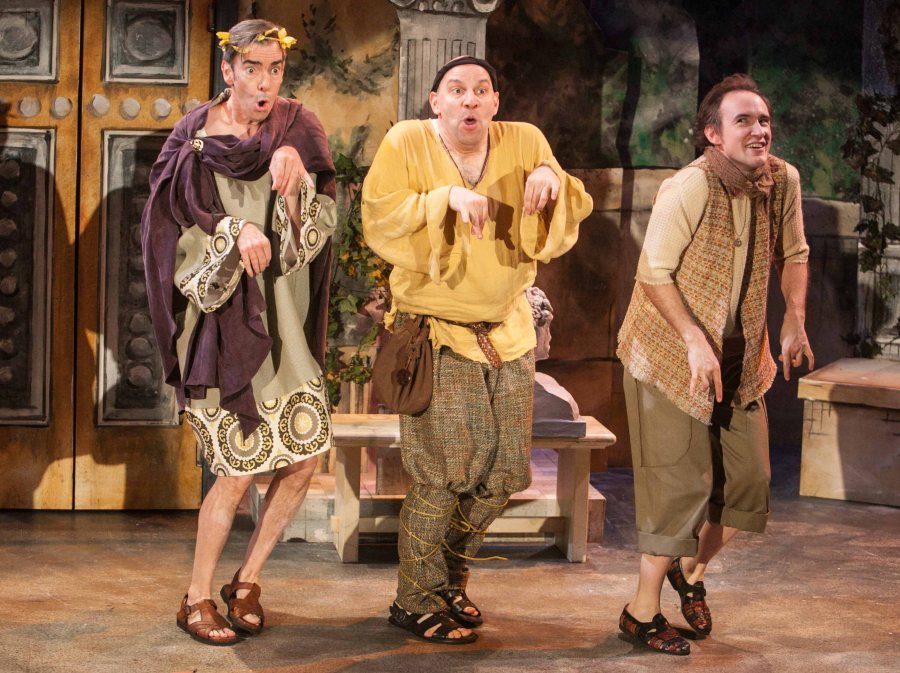 They say tragedy is easy, yet comedy is hard. And in watching Porchlight’s delightful production of the hit 1962 musical comedy, A Funny Thing Happened on the Way to the Forum, I took note of how deftly this hard-working cast navigates Burt Shevelove’s farcical book and Stephen Sondheim’s daffy yet deceptively dense music and lyrics.

In full transparency, Porchlight marks the first production of Forum I’ve seen — this includes the movie that starred Zero Mostel recreating the role that won him the Tony Award (and for which Nathan Lane earned the same accolades in the ’96 Broadway revival). Yet I’m glad this was my first foray into the forum — it’s a very solid and satisfying production.

Leading this effort, the short and compact Bill Larkin makes for a cunning and cute Pseudolus, the wily Roman slave who’ll do anything to become free. It’s a performance that rivals Sweeney Todd, another iconic Sondheim musical Porchlight presented last season, in the amount of energy and gusto required keep the engine of the play churning. Larkin manages this herculean task skillfully, striking a good balance between vaudevillian slap-stick and sincerity.

Director Michael Weber surrounds Larkin with a diverse cast of musical comedy pros, with a few unexpected highlights. Of those, the lanky Miles Blim serves as a perfect foil for Larkin by bringing genuine guilelessness to the role of Hero — the young slave owner whom Pseudolus persuades into freeing if he’s able to unite Hero with his equally naive love interest, Philia (a sweet Sarah Lynn Robinson). As fellow slave Hysterium, Matt Crowle demonstrates his great gift of physical comedy. Read the full review on the Huffington Post >